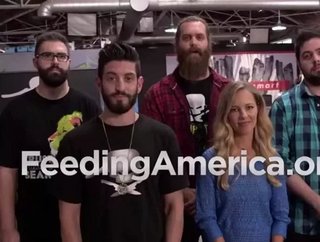 Happy Friday! Its time for another feel-good story, this time with a side of good deeds and epic junk food glory. If youre a junk food junkie like us...

Happy Friday! It’s time for another feel-good story, this time with a side of good deeds and epic junk food glory.

If you’re a junk food junkie like us, you probably remember when Epic Meal Time was just a tiny little YouTube series about Harley Morenstein and his crew of hungry Canadians assembling burgers, fries, pizzas, and bacon (especially bacon) into insane hulking high-calorie monstrosities. Fast forward to a few years later: the YouTube channel has more than 6.6 million followers and the concept on the whole has evolved into several higher profile spin-offs, the most recent of which is Epic Meal Empire on the A&E Network channel FYI.

An awful lot of food goes into the making of an Epic Meal, and it can be hard sometimes for the average consumer to remember that there are many people who have a hard time gaining access to even the essentials. So Feeding America, a domestic hunger relief organization, is teaming up with Epic Meal Empire to draw attention to its cause with a PSA to increase awareness about the problem of child hunger in the United States.

The PSA will air tonight during Epic Meal Empire’s Thanksgiving episode, which makes sense considering that Thanksgiving—and the holiday season in general—is generally a good time to think about what you have and share with your community. The Epic Meal Empire cast and crew are doing their part as well, donating part of their production budget to Feeding America affiliate the LA Regional Food Bank.

“The Thanksgiving holiday is a stark reminder for us that so many children in our country are facing hunger,” said Bob Aiken, Feeding America CEO, in an announcement regarding the PSA effort. “Thanks to ‘Epic Meal Empire’s’ generosity and PSA’s, a new audience will be made aware of efforts around the country to feed our children and avoid food waste.”

As we prepare for Thanksgiving, it is so important to remember those among us who sadly do not have easy access to food,” added Lisa Sherman, President and CEO of the Ad Council who also partnered on the PSA. “Through the history of Feeding America’s generosity in America and ‘Epic Meal Empire’s’ efforts, we are reminded that every little bit helps in the fight against hunger.”

The PSA will air tonight, but you can check it out right now here: