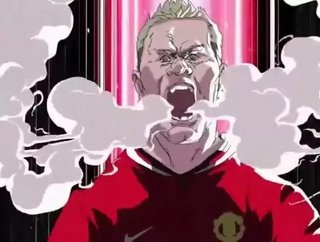 From Gatorade to McDonalds, partnerships between consumer brands and sports teams are a part of life. When those partnerships result in some excellent c...

From Gatorade to McDonald’s, partnerships between consumer brands and sports teams are a part of life. When those partnerships result in some excellent crossover advertising, it’s that much better.

If you’ve seen Quentin Tarantino’s Kill Bill Volume 1, then you’ve seen Nakazawa’s work before (and if you haven't, maybe wait to watch this video until you get home unless your office is all right with bloody animated violence):

"Nissin's 'Hungry to win' is an inspirational campaign that we hope will encourage our fans to aspire to be the best in all they do, whether that's at sport, at school or everyday life," said [Manchester United Group managing director] Richard Arnold. "This call to action reflects Nissin's desire and drive to expand its global footprint, using its partnership with the club to further develop its consumer offering."

Whether or not it inspires consumers to reach for greatness in their day, it’s certainly a pretty cool, dynamic, and beautifully rendered piece of advertising.