[VIDEO] This Totally 90s Ad Puts Sizzler Back on the Map 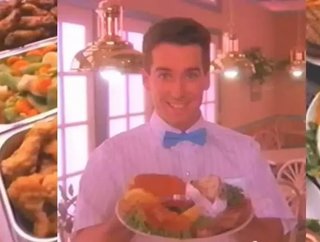 Its Wednesday, and everyones looking for that one distraction that can help them get through the midweek work slog. So its no wonder that todays the day...

It’s Wednesday, and everyone’s looking for that one distraction that can help them get through the midweek work slog. So it’s no wonder that today’s the day an extended Sizzler commercial from 1991 is going viral. Straddling the line between being a spiritual predecessor to Lee Greenwood’s “Proud to Be An American” and a Tim and Eric fever dream, it’s a perfect time capsule of early 1990s Americana and just weird enough that it demands to be shared. Check it out:

America: where sassy girls are hitting home runs, and contractors are overseeing a future of growth. Fishermen raise a new generation to tame the sea, as young sailors and ranch hands are finding love—and all the while, at Sizzler, the choices abound. Truly it’s a thing of beauty.

We would think it’s a well crafted joke along the lines of Too Many Cooks, but the video was first uploaded in 2012 to an account that also hosts a couple of other old commercials (My Pet Monster and Pearle Vision, in particular) alongside a ton of what looks like simply family videos. So we either have to assume that the YouTube account is in it for the long con, or that it’s very real—and also a very real indicator of how drastically marketing changes from generation to generation, and how differently consumers respond to cues and presentations that were once so effective. Though, let it be known, we do respond exceedingly well to nostalgia and irony, which is why this video is going off like gangbusters today.

One unexpected positive of this weird viral blip in the internet is that it has people talking about Sizzler again. Compared to similar family dining chains, Sizzler has been relatively quiet since its heyday—after filing for Chapter 11 bankruptcy protection in the 1990s, the chain has passed through several parent company hands and just never quite recovered the consumer cache it had lost.

But here they are, out of nowhere, lighting up a dreary middle-of-the-week workday and making children of the 1980s across the country think of All-You-Can-Eat Shrimp with fond nostalgia. Could this cause a bump in sales for Sizzler? Could it be the catalyst that Sizzler needs to get back on top? Could it once again be the choice of America?

If it’s going to start somewhere, it may as well be with Sizzler Promotional Commercial ’91.