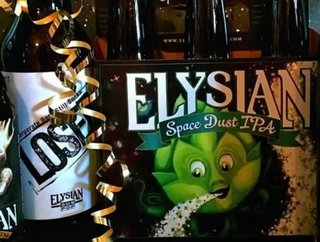 With the Super Bowl less than two weeks away, excitement about Seattle is in the air&mdash;and Anheuser-Busch is feeling it. This morning the AB InBev b...

With the Super Bowl less than two weeks away, excitement about Seattle is in the air—and Anheuser-Busch is feeling it. This morning the AB InBev brewing giant added another craft brewing feather to its portfolio, announcing that it has entered into an agreement to acquire Seattle-based craft brewery Elysian Brewing Company. In a press release from Anheuser-Busch, the company talked about what makes Elysian a standout craft brewery worth investing in:

“Elysian’s story includes everything we look for in a partner,” said Andy Goeler, CEO, Craft, Anheuser-Busch. “The team has spent their careers brewing distinctive beers in the thriving West Coast beer community and building unique venues that celebrate beer. As the fastest growing brewer in Washington, their recipe is working. Elysian’s brands are an important addition to our high-end beer portfolio, and we look forward to working together.”

This marks AB InBev’s second West Coast craft brewing acquisition in almost as many months—in November 2014, the brewing company picked up Oregon’s 10 Barrel Brewing Company along with its brewpubs in Bend, Oregon and Boise, Idaho. Much like 10 Barrel, Elysian has also seen impressive growth—founded in 1995, the brewery today has considerable regional distribution into 11 states and abroad, and sold more than 50,000 barrels in 2014. The new partnership with Anheuser-Busch should also similarly help Elysian expand its scope of distribution in coming years. Also in the press release, Elysian CEO Joe Bisacca expressed excitement about what the support of a backer like Anheuser-Busch could mean for the brewery:

“For two decades, we’ve welcomed guests into our brewpubs and served them creative and impeccably crafted beers,” said Joe Bisacca, Elysian ‎CEO and co-founder, who will continue with Elysian along with his partners, Dick Cantwell and David Buhler. “After a lot of hard work, we’ve grown from one Seattle brewpub to four pub locations and a production brewery. With the support of Anheuser-Busch, we will build on past successes and share our beers with more beer lovers moving forward.”

Anheuser-Busch acquired Elysian for an undisclosed sum, in a transaction that also includes four brewpubs (Elysian Capitol Hill, Elysian Tangletown, Elysian Fields and Elysian BAR) along with the brewery proper. The transaction is expected to be finalized by the end of Q1 2015.