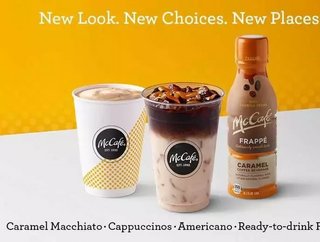 McDonald's has announced that they are partnering up with Coca-cola to launch a new line of ready-to-drink McCaféFrappes The bottled beverages will co...

The bottled beverages will come in three flavours - caramel, mocha and vanilla - and will be available in US grocery stores in 2018.

This is just the start of our McCafé commitment," said Chris Kempczinski, president of McDonald's USA.

"We understand how important the coffee culture is for consumers and we are committed to meeting that demand at the taste, convenience and value only McDonald's can offer."

This is the burger giant's first foray into the almost $2 billion ready-to-drink coffee market; an area which previously had been dominated by the North American Coffee Partnership — a venture between Starbucks and Pepsi Co.

McDonald's has tried hard to win customers back from its rivals and encourage return sales.

The firm has invested heavily in its coffee and pastry range because it believes that "coffee creates a habit.”

In other words, consumers are more likely to return day-after-day for a coffee than they are for a burger or fries.

Since diving into the coffee market, McDonald's has benefited from pricing its beverages lower than its competitors such as Starbucks or Dunkin.

In support of the partnership, Coca-cola said: “As longtime partners of McDonald’s, we look forward to working together to expand the reach and availability of McCafé coffees to more people across the country.

McCafé Frappés will join a diverse yet complementary range of ready-to-drink coffee offerings made and distributed by Coca-Cola.”

As part of the move, McDonald's will benefit from Coca-Cola's distribution chain. The financial terms of the partnership have not been disclosed.