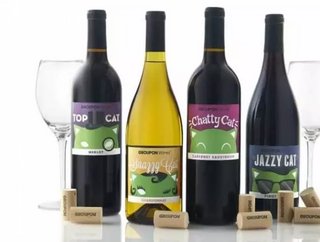 Does the world need a Groupon wine? Sure, of course it does. At least thats what Groupon must believe, because the e-commerce site has just launched a l...

Does the world need a Groupon wine? Sure, of course it does. At least that’s what Groupon must believe, because the e-commerce site has just launched a line of four own-label wines with names and labels featuring variations on our old familiar friend: the Groupon the Cat mascot.

“Today Groupon announced a new line of private label wine, making it easier to keep a few bottles on hand for the holidays or test whether your postal carrier has been drinking your mail,” reads a press release issued by Groupon in its usual off-kilter vernacular. “Inspired by the company's mascot, Groupon the Cat, the line includes four wines — Snazzy Cat Chardonnay, Top Cat Merlot, Chatty Cat Cabernet Sauvignon and Jazzy Cat Pinot Noir — and is sourced from some of California's best wine-growing regions, which are mostly located somewhere around the top part.”

Produced for Groupon by Rainier Wine Co. out of Seattle, Groupon is selling them in a six-pack set including either six of your choice or a sample pack featuring two bottles of Chatty Cat cabernet sauvignon, two bottles of Snazzy Cat chardonnay, and one bottle apiece of Top Cat Merlot and Jazzy Cat pinot noir. Since the wines just launched today, there haven’t been any reviews yet whether they taste as good as their cute kitty-themed labels look. But the descriptions are enticing enough, between the “flavors of French and American oaks, plum, and spice, delivered within a jammy medium body” of the cab and the creamy green apple, melon, and pear flavors promised by the chardonnay.

It’s an interesting move for Groupon, for sure. As Chicago Business reports, Groupon stock is on the rise again for the first time in a while after decent third-quarter results, showing that the company could find a path to success by making the much-needed move from daily deals to a more sustainable e-commerce business plan. The introduction of own-label products like cat wine could be another solid step forward for the brand.