Anheuser-Busch is converting its St. Louis delivery fleet from diesel to natural gas 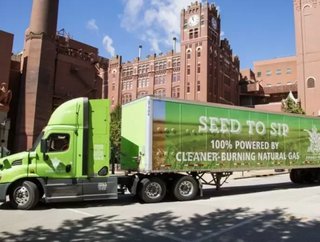 AB InBev has been doubling down on its corporate social responsibility commitments lately, just recently launching a prominent drought relief CRS effort through its Shock Top brand. Now subsidiary Anheuser-Busch is making a fundamental change to the way its logistics system runs. The Budweiser owner recently announced that it is taking its fleet of 97 diesel-fueled delivery tractor trucks at its St. Louis facility and converting them to run on compressed natural gas.

According to a statement released by Anheuser-Busch, this change could reduce the St. Louis-based brewing company’s carbon dioxide emissions by as much as 2,500 tons per year as they travel an average of 11 million miles per year delivering beer from the St. Louis facility throughout the Midwest. This estimate isn’t based on pure conjecture but a year of observed experience—last year Anheuser-Busch completed a similar transition at its Houston brewery, converting 66 diesel trucks to natural gas. Anheuser-Busch predicts that this even larger conversion will provide an even stronger environmental benefit:

“Transitioning our entire St. Louis tractor fleet to CNG-powered engines brings environmental benefits directly to our company and our community,” said James Sembrot, Senior Director, Transportation, Anheuser-Busch, in a press release from the company. “A conversion of this scale is indicative of the commitment we’ve made to deploying more sustainable technologies and processes at each stage of the brewing process – from Seed to Sip.”

Why capitalize the “Seed to Sip” turn of phrase? From Seed to Sip represents Anheuser-Busch’s overarching CSR commitments, which include smarter water usage and reducing supply chain-related carbon emissions by 15 percent before 2018. This new initiative in St. Louis is another smart move in the company’s mission, and its home city has taken notice.

“I want to thank Anheuser-Busch for setting an example for businesses across the City by committing to environmentally-friendly business practices,” said St. Louis Mayor Francis Slay in Anheuser-Busch’s press release. “With Anheuser-Busch identifying and implementing sustainable alternatives, the company is helping to reduce greenhouse gas emissions and make St. Louis a better place for all of us to live, work and play.”

Want to see more? Check out Anheuser-Busch’s video going in depth on its emissions solutions plans below: