[VIDEO] Is This Adult Swim Superstar the Sexiest Carl's Jr/Hardee's Spokesmodel Yet? 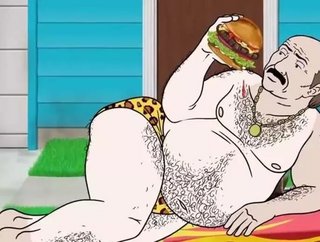 For decades now, eternal East coast/West coast fast food franchise dichotomy Carl’s Jr/Hardee’s has more or less committed to a certain dude-friendly aesthetic in its ad campaigns – namely a lot of manly men eating manly things, and pretty (mostly celebrity) girls at the beach or the car wash dripping burger juice and sauce all over their blouses or bikinis.

Their latest ad campaign is a tongue-in-cheek attempt to mash those concepts together, and aims to prove that their fresh baked buns and juicy burgers can bring out the inner sultry bikini model in even the unlikeliest of spokespeople. Enter: Carl Brutananadilewski, cartoon celebrity and next door neighbor to the fast food superheroes of Cartoon Network's Adult Swim mainstay Aqua Teen Hunger Force, who joins the Carl's Jr/Hardee's team in a made-for-Adult Swim ad spot written and produced by ATHF creators Dave Willis and Matt Maiellaro along with media agency Initiative and creative agency 72andSunny.

“With every ad, we want to give our fans something that makes them do a double-take at their TV sets, and with this commercial I think we’ve really outdone ourselves,” said Steve Lemley, Senior Vice President of Field Marketing and Media at Carl’s Jr. and Hardee’s, in a statement announcing the ad campaign. “Though not beautiful in the traditional way as the talent we’ve worked with in the past, Carl brings a certain willingness to the role and a unique interpretation of ‘Fresh Baked Buns.’”

"A unique interpretation" is one way of putting it. But here, don’t take our word for it: As weird and off-the-wall as this might appear, it’s really not that weird for Carl’s Jr/Hardee’s. The brand has been developing a foothold in pop culture geekdom for a while now, using characters from X-Men: Days of Future Past in a campaign earlier this year and bringing a food truck to San Diego Comic-Con in 2013. This feels like another organic step in that development process, and as a jokey over-the-top nod toward the brand’s ad campaign oeuvre overall it works out pretty well.