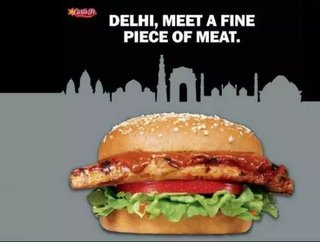 Carls Jr. is a business on the move. Last December the California-based burger chain announced a new franchise partnership that would introduce Carls Jr...

Carl’s Jr. is a business on the move. Last December the California-based burger chain announced a new franchise partnership that would introduce Carl’s Jr. to Japan, and this spring the chain followed up by launching its brand in Guatemala and Colombia. Now Carl’s Jr. is preparing to launch in a new territory once again, and this time the destination of choice is India.

This week Carl’s Jr. announced that it will be opening its first ever India location at the Select Citywalk mall in New Delhi on August 8. The fast food chain is being launched by Cybiz BrightStar Restaurants Pvt. Ltd. through a master franchise agreement between CKE Restaurants and CybizCorp, a Gurgaon-based franchising and “entry and expansion strategist” business specializing in retail and hospitality. While the company also successfully manages RE/MAX throughout India, this appears to be CybizCorp’s first foray into working with a US-based restaurant franchise.

Launching a burger brand in India is always a unique situation, simply due to the fact that prevalent religious beliefs make beef consumption in India exceedingly rare. But like other brands who have successfully launched in India before them, Carl’s Jr. has taken this well into account and is launching a menu based on its chicken and turkey products plus a new vegetarian lineup tailored to the tastes and requirements of India’s consumer base. Cybiz BrightStar Restaurants Executive Director Sana Chopra recently discussed the new menu:

“Currently consumers are mainly familiar with fried vegetarian patties. We will be providing a few char-grilled vegetarian burgers with char-grilled patties also. This will be a healthier option for our customers. The process of char-grilling does not require any oil, as the patty is cooked over a conveyer belt with open flames using patty's own juices! We have a dedicated menu for vegetarians along with our classic hand-scoop milkshakes that will have fresh ingredients without any pre-mixes. Our sauces are going to be the standard global varieties.”

Carl’s Jr. hopes to open at least 100 locations throughout India within the next ten years. Whether that will come to fruition or not depends on this first step in August.