[INFOGRAPHIC] 5 Insights and More About the Beer and Wine Industries 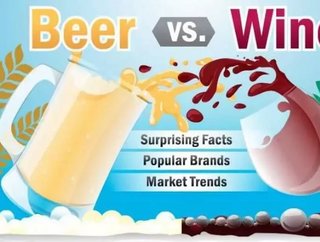 Beer and wine are two of the largest beverage industries in the world, and are constantly in a state of flux depending on new breakthroughs and consumer...

Beer and wine are two of the largest beverage industries in the world, and are constantly in a state of flux depending on new breakthroughs and consumer interests. This week CompareCamp put together an interesting infographic comparing the two industries. Here are some of the top insights we found:

2. …But That Ratio is Changing Rapidly

Perhaps surprisingly, the youngest demographic is one of the two demographics most actively driving the mainstream wine market – 18 to 29 year olds are taking a fiercely active role, combined with not-yet-retired adults around the age of 50. Knowledge of the age and interests of your biggest demographic is critically useful for producers as well as marketers.

4. China is a Major Driver for the Beer Industry

In terms of volume, China consumes nearly double the beer of the United States, the world’s second biggest beer market. On the other hand, China is no slouch when it comes to brewing and beer production – four of the top ten beer brands in the world are made in China, making it a tougher market to break into without something special to differentiate your brand.

Consumers may be willing to pay more for a quality bottle of beer these days, but wine connoisseurs still outbid them in the long run. According to the infographic, the most expensive bottle of wine sold at retail is a Chateau Margaux 2009, three bottles of which were put out at a specialty shop in Dubai – the price tag for each bottle came to $195,000, thousands upon thousands more than even the priciest beer gone to auction. Still, as craft breweries continue to learn from the wine industry and build scarcity into small batch brews, the gap between beer and wine prices may start to level out.

But there’s a lot more to it all than that. Check out the full infographic for more insights and facts: