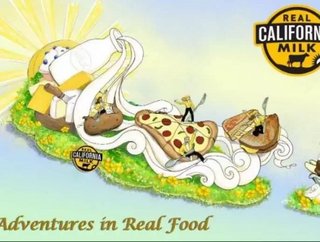 Californias annual Rose Parade on New Years Day is major part of the states culture, and one organization is participating for the first time in the par...

California’s annual Rose Parade on New Year’s Day is major part of the state’s culture, and one organization is participating for the first time in the parade’s 127-year history. This week the California Milk Advisory Board has revealed its plans for a float to represent the 1,400 California dairy producers and families who make up the organization.

This year’s Tournament of Roses theme is “Find Your Adventure,” and the California Milk Advisory Board is upholding that theme with a float called “Adventures in Real Food.” According to a statement from the California Milk Advisory Board, the float also aligns with its “Return to Real” ad campaign and will contain features like a butter and sour cream-topped baked potato boat, a pizza paddleboard, and a grilled cheese sandwich raft floating on milk river rapids warmed by a cheddar cheese wheel sun.

“The Rose Parade is a California icon that dates back more than 100 years, with a history as rich as California’s 200-year-old dairy tradition,” said John Talbot, CEO of California Milk Advisory Board, in the board’s statement announcing the float. “What better way to showcase the milk and dairy products that make California the number one dairy state while aligning with our new ‘Return to Real’ ad campaign in support of Real California dairy foods and the dairy farmers who help bring them to the table.”