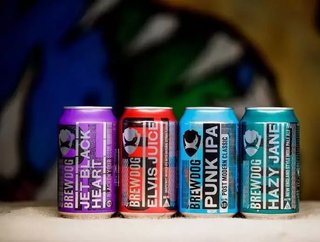 Craft brewer, BrewDog, has reported a 55% jump in total revenue to £78mn (US$100.3mn) compared to the same time last year, as the firm expanded interna...

Craft brewer, BrewDog, has reported a 55% jump in total revenue to £78mn (US$100.3mn) compared to the same time last year, as the firm expanded internationally and seen a rise in demand for its beers.

The Scottish company behind Punk IPA beer cited the growth of its bar division and its newly acquired Draft House pub group as key drivers of this increase.

The UK’s 13th biggest beer brand also said it has invested “heavily” in off-trade, creating partnerships with supermarkets like Morrisons and Tesco, which helped to contribute to UK retail sales growth of 83%.

So far in 2018, the brewer has opened nine bars internationally, including two in Columbus, Ohio, and its first BrewPub in Tower Hill, London.

Last week, BrewDog also opened its first Asian bar in Seoul, Seoul Korea, and later this month it will open what it describes as the world’s first craft beer hotel called The DogHouse.

BrewDog co-founder James Watt was pleased with the figures but said that the firm “won’t rest on [its] laurels”.

“We’re at one of the most exciting and pivotal junctures in our existence,” he said.

“We’ve established a solid and rapidly growing presence in the UK and the demand from Europe shows no signs of waning. We’re making significant inroads in Asia and Australia, which I believe will begin to bear fruit in 2019. Our US business is expanding at breakneck speed with new distribution points added every week.

All this wouldn’t be possible without our passionate community and a global beer audience that is growing increasingly tired of the lack of quality and variety offered by megabreweries.”