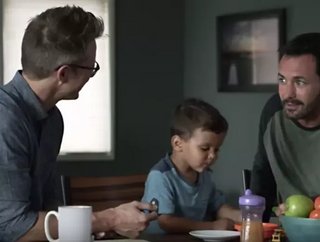 The release of the latest Star Wars movie is still a couple of months away, but cross-brand promotion is already in full swing. Campbell Soup Company re...

The release of the latest Star Wars movie is still a couple of months away, but cross-brand promotion is already in full swing. Campbell Soup Company recently released a line of limited-edition Star Wars-themed chicken noodle soups and Spaghetti-Os, featuring collectible labels and pasta shaped like beloved Star Wars characters. To go along with the release, Campbell launched a new ad this week that is gathering praise and indignation for daring to peek in on the everyday life of a family enjoying some Star Wars chicken noodle soup.

The family in particular consists of a son and his two fathers, who take turns trying their hand at Darth Vader’s famous “I am your father” line. As Eater points out, the family wasn’t spun out of whole cloth by a director and a casting agent—it’s an actual married couple and their real-life son. In short, it’s a charming soup and Star Wars-themed little slice of life, an ideal fit for Campbell Soup Company’s overarching “food for real, real life” slice of life ad campaign:

Someday it won’t be newsworthy when different types of families are shown in advertisements. It will just be accepted that families come in a colorful array of shapes and sizes, and they all need soups and cereal and furniture and laundry detergent just as much as anyone else.

But as the reaction of One Million Moms shows, we still have a long way to go before we get there. The group, a division of conservative group the American Family Association, issued a statement urging followers to boycott Campbell Soup Company products until the ad is taken off the air:

"They should not be highlighting who is attracted to whom or who sleeps with whom," they wrote. "There is concern about the way this ad is pushing the LGBT agenda, but an even greater concern is the way that they are attempting to redefine 'family' and 'real marriage.'"

But as successful ads from other brands like Cheerios, Honey Maid, and Oreos have already shown, the tides are turning in the advertising world to reflect a more diverse and realistic cross-section of consumers.