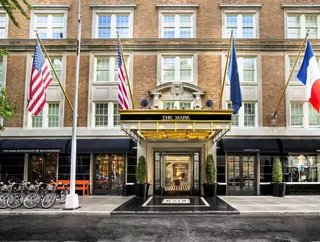 The Mark Hotel,based in Manhattan near Central Park, has been recognised as the World’s Best City Hotel, heading the list of 100 entrants. Swiss busi...

The Mark Hotel, based in Manhattan near Central Park, has been recognised as the World’s Best City Hotel, heading the list of 100 entrants.

Swiss business publication Bilanz compiled the rankings, and guests can stay from anywhere between around $500 and $3,000 a night.

"Our new winner is a beautiful, relaxed refuge on the Upper East Side," Bilanz said. "The Mark in New York sets the standard worldwide in terms of service; when checking out the receptionist asks, 'what can we do better for your next stay?'"

The Mark’s reputation has grown considerably since it re-opened almost a decade ago after a bold renovation by French interior designer Jacques Grange, his first foray into the US.

Bilanz's rating follows a long list of awards and accolades The Mark has received over the years since its re-imagination by Grange, including Condé Nast Traveler's Hot List and Gold List for several years in a row, Condé Nast Traveler's Reader's Choice Awards in 2014 and 2016, U.S. News & World Report Best Hotels list in 2014, 2015 & 2017, as well as Travel & Leisure's Gold List.

The Mark Hotel guests have access to amenities that include a 24/7 check-in, 24/7 room service by Michelin Three-Star chef Jean-Georges Vongerichten, a Frédéric Fekkai salon, a John Lobb shoe-shine, the opportunity to shop 24/7 at Bergdorf Goodman as well as The Mark Bikes and The Mark Pedicabs.

In spring this year, The Mark introduced The Mark Sailboat, a 70-foot Herreshoff S-Boat and one of the last of the iconic brand's original sailboats built in 1929, that guests can charter for a three-hour journey in the New York Harbor.