Three Years In, Are the Fast Food Strikes Working? 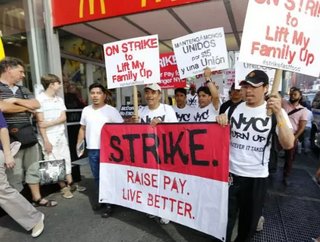 In 2012, a general unrest started to galvanize between fast food executives at the top of the chain and the low-wage fast food workers who keep those ch...

In 2012, a general unrest started to galvanize between fast food executives at the top of the chain and the low-wage fast food workers who keep those chains running day to day—by the end of the year, strikes were breaking out among fast food workers. Today’s event, coinciding with Tax Day, marks the Fast Food Forward movement’s biggest push yet, with organized strikes spanning hundreds of cities coast to coast demanding $15-per-hour wages and the right to unionize.

Like a snowball gathering mass, this most recent strike has workers representing various low-wage professions from retail workers to adjunct professors joining the fold. According to USA Today, the day also saw strikes and protests occurring around the world in cities like Toronto, Athens, Sao Paulo and Hong Kong. This global action has prompted organizers to note that the sentiment of these protests has gone well beyond just fast food to represent something bigger:

"It's something different," said Kendall Fells, organizing director of Fight for $15, which is funded by the Service Employees International Union. "This is much more of an economic and racial justice movement than the fast-food workers strikes of the past two years."

Almost three years into strikes and protests, are they having an effect? Are those at the top stopping to listen? Has meaningful change occurred?

Little by little, it looks like change is happening. There hasn’t been a complete tidal shift yet, and not everyone agrees with the essence of the strikes or trusts in their motives. Some accuse the movement of being more about unions taking over the industry than about providing better benefits and wages for fast food workers:

“This is an orchestrated effort,” Ryan Williams, media advisor for Worker Center Watch, said during a press call Monday. “The union has invested upwards of $20 million.”

Others in the industry have responded to today’s strike with vocal opposition to the concept of higher wages, citing the idea that higher wages would mean price increases across the board and the death of concepts like the Dollar Menu:

Edgerton says that fast food restaurants won't be able to provide that kind of a wage to workers and be able to maintain cheap menu prices, or dollar menus. "You're not going to get these dollar hamburgers anymore that both Burger King and McDonald's had," Edgerton told Time. "I see a lot of $10 hamburgers arriving on the scene."

Nonetheless, little by little, change is happening. Earlier this year Walmart announced plans to raise its minimum wage to $9-per-hour by April and to $10-per-hour by 2016. Just ahead of this strike, McDonald’s also announced plans to raise wages at its company-owned stores. Though this latter move drew ire and criticism from activists pointing out that this only affects 10 percent of McDonald’s workers, it’s still a change in a positive direction.

So while the change might be small and in the minority for now, it’s certainly there and it’s growing. As the movement continues to expand and gain further momentum, it only seems a matter of time before the tides truly start to turn.