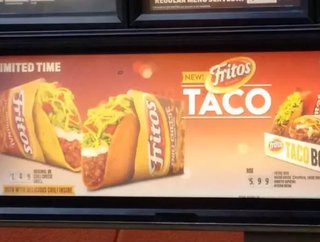 Good news for Taco Bell fans who thought that the franchise was done experimenting with its Doritos Locos Tacos line: Taco Bell is simply shifting gears...

Good news for Taco Bell fans who thought that the franchise was done experimenting with its Doritos Locos Tacos line: Taco Bell is simply shifting gears to a different member of the Frito-Lay family now, and the results are already looking glorious. According to alert and astute Redditors, Fritos Tacos and Chili Cheese Fritos Tacos have been spotted at test market locations in Tennessee.

Compared to the massively successful initial rollout of the Doritos Locos Taco just a few years ago, some consumers are looking at this new launch with a dose of skepticism regarding whether it will live up to the standards set by Doritos Locos. After all, as some consumers have pointed out, a regular Fritos Taco isn’t too earth shattering—what is a Frito chip, after all, if not just a uniquely shaped and extra salty corn chip? And what is a hard taco shell, if not an also uniquely shaped corn chip? We can’t (yet) see too much separating the original flavored Fritos Taco from any other traditional crunchy taco.

With that said, there is certainly still excitement and optimism, likely thanks to the strong idea of the Chili Cheese Fritos Taco. With a different kind of cheesy kick compared to Nacho Cheese Doritos, and just a little bit of spice, this could be the snack-flavored taco we’ve been waiting for all this time. (Well, while we continue to wait for a Salsa Verde or Nacho Picoso Dinamitas Doritos Locos Taco, at least.)

On the other side of the Great Breakfast Wars divide, McDonald’s has been launching new products as well like its new Artisan Grilled Chicken Sandwich—but, more often than not, its new items seem to be striking out with consumers. What gives? More importantly, how can Taco Bell (and you!) learn from it and avoid falling into the same situation?

It appears to be a matter of intention. McDonald’s has been in a constant state of flux—shifting, adding, removing and replacing items almost at random in an effort to see what sticks—and by doing this, the image that McDonald’s presents more of a business that has grown unsure of its identity. Thus far, Taco Bell is managing to toe the line and stay in its fan base’s good graces by keeping its new product rollouts well timed, purposeful, and to a minimum. What’s more, every new item stays on brand—Fritos Tacos may be different, but they’re still very much of a piece with the Taco Bell Frito-Lay tie-in theme. Just weeks ago it rolled out several new breakfast and crispy chicken-based items at once, but that rollout was solid and accompanied by a smart campaign to tie the new products together. As a result, consumers haven’t suffered from rollout fatigue or diminishing returns just yet.

Taco Bell will do well to stick with that strategy of smart execution moving forward. By trying to launch too much too fast, the danger of pushing consumers away can quickly become all too real.