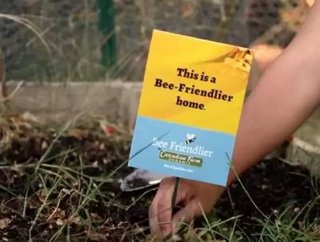 They may not exactly know it, but bees play an important role in the world of agriculture. According to the USDA, bees are responsible for pollinating a...

They may not exactly know it, but bees play an important role in the world of agriculture. According to the USDA, bees are responsible for pollinating approximately 75 percent of United States food crops annually, from fruits to nuts to vegetables – the Natural Resources Defense Council puts that at an estimated $15 billion in domestically grown fruits, nuts, and vegetables every year. Bees even pollinate the clover and alfalfa that keep beef and dairy cows well fed, proving that practically every segment of the food industry is at least partially dependent on the tireless work of bee colonies.

But the bee population is in peril, due to a phenomenon known as colony collapse disorder – the United States honey bee population has dwindled by more than 25 percent since 1990, and in some countries in Europe the numbers are even worse. The phenomenon is still not fully understood, although evidence has pointed to possible causes like pesticide use or the altered genetic structure of GMO crops. But what is understood is that we need to bring back the bee population – and nothing welcomes bees back like wildflowers.

That’s the inspiration for Cascadian Farm’s “Bee Friendlier” campaign, conceived by the General Mills-owned organic brand and Minneapolis-based agency Solve Advertising and Branding as a call to action for farmers and consumers alike to do their part in planting more flowers to encourage a resurgence of bee populations.

As Solve CEO John Colasanti explains to the New York Times, the goal with the campaign is to not just make people aware of the issue, but also to provide a simple action that anyone can tackle to help solve the problem:

“It’s more about action than it is about awareness,” Mr. Colasanti said. “As we looked at what just about everybody could do to make a significant difference, it came down to planting wildflowers, so we focused on that.”

Scott Lee, director of marketing for Cascadian Farm, also spoke on the importance of the campaign’s message and the implications of the disappearing bee populations:

“If bee colonies continue to crash and those hives continue to go away, it puts strain on the food supply and our supply chain,” Mr. Lee said. “Also, it’s something that more and more consumers are becoming aware of, so it’s an issue that’s important to our consumers as well.”

Will the campaign work? There’s a chance that General Mills could face some backlash over the ad for greenwashing – though the company is fond of acquiring organic and sustainable brands like Cascadian Farm and more recently Annie’s Homegrown, the overarching General Mills brand remains fairly committed to conventional techniques like using GMO grains and the kinds of pesticides that could be contributing to bee colony collapse. Last month, a vocal segment of consumers expressed frustration when General Mills shareholders ultimately rejected a proposal to make Cheerios GMO-free. In that light, consumers could perceive this campaign as a case of the left hand not knowing what the right hand is doing. But according to Cascadian Farm’s Lee, it’s more about General Mills allowing its brands to maintain their own diverse identities, values and concerns:

“General Mills understands there are varying degrees of beliefs and consumer interests and offers non-G.M.O. and organic brands like Cascadian Farm,” he said. “So from a brand standpoint, ‘Bee Friendlier’ is very much aligned with our beliefs, and General Mills recognizes that.”

In the end, whether consumers agree with General Mills on all their ethics or not, it’s hard to argue that our bees need some help. If the “Bee Friendlier” campaign can inspire consumers to take action even in their own small way, it could add up to a lot of good work done.