Lightning Round: Shake Shack Stocks and the Truth About Nacho Cheese 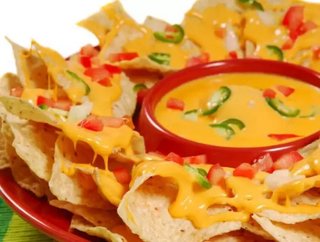 First off: congrats to Shake Shack! The burger chain went public on Friday with seriously positive results, reaching highs of $47-$50 per share compared...

First off: congrats to Shake Shack! The burger chain went public on Friday with seriously positive results, reaching highs of $47-$50 per share compared to the opening price of $21. ~ Eater National

What's the best snack to eat during the Super Bowl? Deadspin did a reader poll and the results are in: Nacho Cheese Doritos. ~ Deadspin

Speaking of nacho cheese, we were ready to be really resentful about this Bloomberg article asserting that nacho cheese is not a real thing. But once we read it, we were like:

Once your Super Bowl foodfest is over, what’s the best diet? According to a new piece in The Guardian, it’s not about fads: it’s about sustainability. ~ The Guardian

Bad news for anyone who was planning to make a pilgrimage to the two McDonald’s franchise locations that still stock the McPizza (according to Canada.com). Another Canadian publication, Quebec’s Journal-Metro, sent their Viral Inspector out to get in touch with those locations and debunk the report—they sell pizzas, but they’re not officially sanctioned McPizzas. (The article’s in French, but there’s a recap in English at the end). ~ Journal-Metro

We don’t historically associate beer with sharper and stronger memories, but that could all change. A new study in the American Chemical Society's Journal of Agricultural and Food Chemistry suggests that properties of the compound xanthohumol found in hops could protect the brain against degenerative diseases like Alzheimer’s and Parkinson’s. ~ Foodbeast

Lucky Peach contributor Lucas Peterson took it upon himself to rank a range of instant ramen products along a scatter chart. Over at FDF World we feel like Maruchan Shrimp deserves a higher spot on the list, but we’re pretty sure we’re alone in our principles on that one. ~ Lucky Peach