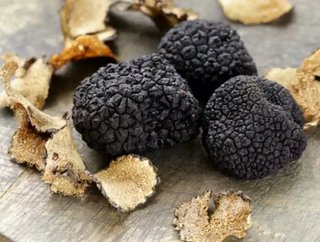 Rare, desirable, beautiful (tasting) and expensive, truffles are said to be the diamond of the fine dining world&mdash;and South Africa is ready to kick...

Rare, desirable, beautiful (tasting) and expensive, truffles are said to be the diamond of the fine dining world—and South Africa is ready to kick start a whole different kind of mining industry in the country. Late last week, it was confirmed that Mpumalanga plantation owner Cameron Anderson’s efforts to cultivate the coveted fungi in his oak orchards have paid off with the discovery of what is thought to be the first commercially produced South African black truffle.

This discovery was no random find, as “commercially produced” obviously suggests, but it was a long time in the making. Anderson planted his orchard of truffle-inoculated oak trees nearly nine years ago, and ever since then it’s been a waiting game to see what develops. Anderson’s dog, a weimaraner trained with truffle oil to sniff out any growth, discovered the black truffle growth under one of his trees in August, and from there he had to wait even longer for agricultural scientists to examine the truffle and certify that it is in fact authentic. This month the results at last came back positive. As Anderson relayed to The Guardian, it’s an exciting position to be in:

“I was elated,” he recalled on Tuesday. “The future of the project was hanging by a thread at that point. It’s not assured yet but this motivates you to push a hell of a lot harder.”

Not only does this give hope and motivation to Anderson regarding the potential of his truffle plantation in the making, but it also gives hope to the rest of this first generation of fledgling truffle farmers waiting on growth of their own and hoping that South Africa will prove to be a viable landscape for production:

It’s a dream come true,” said Van Rij, 41, who has been inoculating truffle fungi on to the roots of oak trees for years. “I’ve been telling people that it would grow in South Africa but a lot are not willing to invest money on a venture that has not been proven. Now we know it’s actually possible and there will always be a market for them.”

One big question is: if South Africa becomes a hotbed for truffle production, how will it affect the truffle market in the long run? Will increased availability drive the price down, making it less of a must-have luxury item—and if so will that have a negative impact, or will more chefs and diners just be thrilled to have the chance to experience the delicacy as it becomes less cost prohibitive? Alternately, will production still be limited enough that even this new arena won’t change the market too drastically?

Those may be questions to worry about someday, but not just yet. It’s true that nothing is assured yet, as far as this discovery is foretelling rampant success for truffle growers in South Africa. Experts will likely need to see at least a few more similar discoveries from Anderson as well as other growers before more definitive claims can be made—though according to The Guardian, some experts suppose that other truffles may have already been found and harvested, but weren’t publicized for fear of being robbed. Still, for now, it’s a very good sign for all involved.