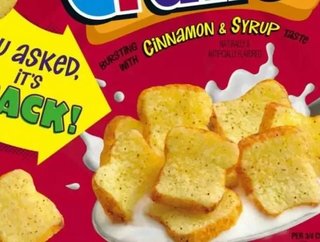 If you were running out of hope for humanity, heres a ray of light: General Mills is bringing back the beloved and lost breakfast cereal French Toast Cr...

If you were running out of hope for humanity, here’s a ray of light: General Mills is bringing back the beloved and lost breakfast cereal French Toast Crunch.

French Toast Crunch—little brother of General Mills pillar Cinnamon Toast Crunch—was introduced in 1995, making an indelible impression on all breakfast cereal-loving grade school-aged children throughout the United States. Then it was taken away before its time, discontinued in 2006 everywhere but Canada. According to the General Mills blog, the continued affection that former ‘90s kids still express for French Toast Crunch to this day encouraged the food processing company to put it back into production:

“We have been overwhelmed by the consumer conversations, requests and passion for the cereal to come back,” says Waylon Good, marketing manager for Big G. “We value our fans and are so excited to be able to bring it back for them.”

The General Mills blog states that the cereal is already available in certain stores right now, and is expected to secure nationwide distribution by the end of January 2015.

Sure, it’s one more brand getting on the bandwagon with Coca-Cola’s Surge soda resurrection and Mars Inc.’s M&Ms Crispy reboot. But Millennials are a generation with a staggering sense of nostalgia and an increasing amount of disposable income to burn. We can’t fault businesses from pulling old titles out of the vault and taking full advantage.

All we really can do is ask: now that this throwback revitalization is set in motion, how far can we take it? What do we have to do around here to get General Mills to bring back Teenage Mutant Ninja Turtles cereal? Because that would be the best.