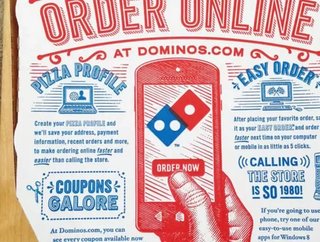 The American pizza chain, Domino’s Pizza, has announced the appointment of a new Vice-President within its International division, as well as a new Se...

The American pizza chain, Domino’s Pizza, has announced the appointment of a new Vice-President within its International division, as well as a new Senior Vice-President and Chief Brand and Innovation Officer.

Joe Jordan has been given the title of International Vice-President, with the responsibility of leading European, Middle Eastern, and African operations.

Mr Jordan will report to his superior, Richard Allison, who holds the title of President of Domino’s International.

Prior to his new position, the new VP was the US Chief Marketing Officer of Domino’s Pizza for three years.

During Jordan’s tenure, the sales of Domino’s same-stores grew double digits in 2015 and 2016.

Art D’Elia has been offered the position of Senior Vice-President and Chief Brand and Innovation Officer, and will report to Russell Weiner, President of Domino’s US.

D’Elia has preciously been the Chief Marketing Officer for Danone Dairy UBN, where he led marketing in the UK, Ireland, Belgium, The Netherlands, and Luxembourg.

“As our brand becomes a global leader in markets around the world we have a chance to expand our great leadership and provide opportunities for exceptional performers,” commented Patrick Doyle, President and Chief Executive Officer of Domino’s.

“We’re excited about this change, and the chance to share our resources and put proven leaders into positions we believe will help us accelerate our brand trajectory.”