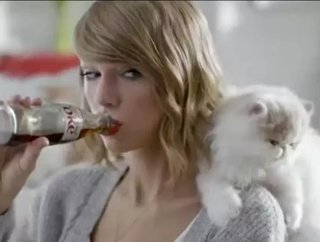 Happy Friday! Let’s cap this week with a sublime piece of appeal-to-cuteness advertising. Everyone knows that Taylor Swift is the official Cat Lady o...

Happy Friday! Let’s cap this week with a sublime piece of appeal-to-cuteness advertising.

Everyone knows that Taylor Swift is the official Cat Lady of pop music, mother and staunch defender of Olivia Benson, her impeccably-named little Scottish Fold. Taylor Swift has also been a spokesperson for Diet Coke since 2013, appearing in previous commercials for the brand. Coca-Cola's latest Diet Coke ad mashes those concepts together for the latest installment of its somewhat surreal fantasy-based “Get a Taste” ad campaign.

“Millions of people enjoy Diet Coke for one simple reason – the taste. The unique, delicious taste has always been what sets Diet Coke apart and incites passion in our fans,” said Andrew McMillin, vice president, Coca-Cola Brands, North America, in a press release for the launch of the ad campaign at the start of October. “Through the ‘Get A Taste’ campaign, we’re reminding fans why they fell in love with Diet Coke the first time, and we’re inviting everyone to experience the magic behind the taste of Diet Coke.”

All of the ads are pretty fun, imagining non-depressing Little Match Girl scenarios in which various consumers are whisked away from dull everyday hassles (a cramped flight, a drive through the car wash) to jazzy effervescent dream worlds for just as long as they’re sipping on a Diet Coke.

Swift’s ad spot is the third installment in the campaign. In addition to a track of her new album and the small screen debut of (this version of) Olivia Benson, the ad features Swift having an enviable Trouble with Tribbles-like kitten experience:

“The spot with Taylor is lighthearted and fun, bringing together two of her favorite things – kittens and Diet Coke,” says McMillin in a separate press release for the Taylor Swift ad spot. “And it genuinely shows, from Taylor’s perspective, what her life would be like if it tasted as good as Diet Coke.”

You know what, it’s pretty hard to argue with advertising that promises you an apartment full of kittens. Well done, Diet Coke. Well done.