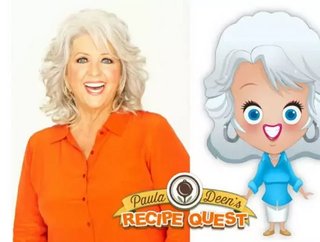 With Kim Kardashians pioneering Kim Kardashian: Hollywood freemium app game netting a cool $43.3 million in its first three months of existence, it was...

With Kim Kardashian’s pioneering Kim Kardashian: Hollywood freemium app game netting a cool $43.3 million in its first three months of existence, it was only a matter of time before more celebrities jumped on the video game mobile app bandwagon. Only who would have expected one of those celebrities hopping on board to be Paula Deen?

Still, whether it was expected or not, she’s here with an app nonetheless. This week the Butter Queen herself dropped Paula Deen’s Recipe Quest, a freemium (read: free to play, but getting far is probably going to cost you) mobile app for iOS and Android.

From what we can glean from the game’s iTunes page, it appears to be a savory spin on other matching puzzle games like Bejeweled Blitz or Candy Crush Saga, with players matching ingredients like tomatoes and eggs to beat levels and unlock Paula Deen’s own patented recipes. The game appears to offer further incentives like leaderboards and the chance to win a trip to appear and cook on the Paula Deen Show in real life.

But to really get a taste of the game without downloading it yourself, look no further than the promotional video that Paula Deen launched to promote the app. It doesn’t really tell us all that much about Paula Deen’s Recipe Quest beyond a brief look at the end, but it is awfully special in its own way:

If only you could play for a chance to win that giant whisk. Clearly that’s the real prize. Until then, we’ll be here waiting to see how the sales figures stack up compared to Kim Kardashian: Hollywood. Can Paula Deen’s own cult following compare? If her cruise events can succeed, anything’s possible.