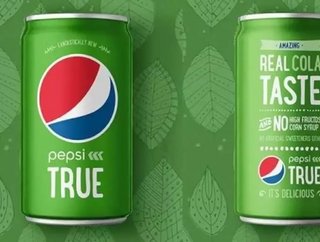 Last week PepsiCo, Coca-Cola, and Dr. Pepper Snapple Group all pledged, among other things, to focus on producing and distributing lower-calorie and no...

Last week PepsiCo, Coca-Cola, and Dr. Pepper Snapple Group all pledged, among other things, to focus on producing and distributing lower-calorie and no-calorie soft drinks in the future as part of a plan to combat obesity issues. At the time, the Stevia and natural sugar-sweetened Coca-Cola Life was touted as a prominent example of this new reduced calorie focus. But PepsiCo does not mess around. This week the soft drink giant challenged Coke Life directly by launching a green-labeled Stevia and natural sugar-sweetened cola soft drink of its own: Pepsi True.

Here’s the thing: Coca-Cola has been rolling out Coca-Cola Life around the world, but is still available only regionally within the United States – it won’t launch nationwide until November. PepsiCo, on the other hand, is launching Pepsi True across the country in one fell swoop in mid-October, which could give it the jump on Coca-Cola throughout a significant portion of the country.

But wait! It’s not that simple – PepsiCo is also taking another play from Coca-Cola’s playbook (via the Surge relaunch) and initially making Pepsi True available only online through Amazon. The e-commerce retailer will offer 24-packs of the soda while PepsiCo gauges the true extent of consumer demand:

The Amazon rollout, Sicher says, "lets PepsiCo use a high-profile channel to gauge initial response. It also allows the product to get some scale and awareness before it goes into the bottler system."

Once they’re both widely available consumers will probably gravitate toward the brand name they’re most used to reaching for. Only time will tell what kind of lasting impact an earlier launch and online-only retailing will have, and whether these decisions will ultimately harm or help the brand.

But no matter where those consumers fall, the important thing is that now The Coca-Cola Company and PepsiCo both have a Stevia-flavored flagship cola on the market. In other words: your move, Dr. Pepper.