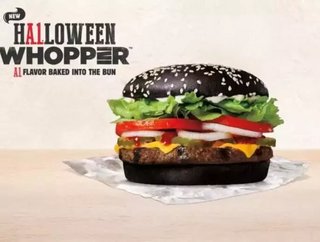 Last year we examined the launch of Burger King Japans Kuro Pearl and Kuro Diamond burgers, dressed up in black squid ink buns and cheese. While we ackn...

Last year we examined the launch of Burger King Japan’s Kuro Pearl and Kuro Diamond burgers, dressed up in black squid ink buns and cheese. While we acknowledged the magic of franchise localization, and the fact that such an intense novelty concept not be as successful in line with the cultural norms of United States consumers, we secretly hoped that Burger King HQ would at least give its North American audience the chance to try. Now our secret hopes have been answered, with the launch of Burger King’s spooky new Halloween Whopper LTO, sandwiched in a bun as black as your soul just in time for Halloween.

While Burger King confirms that its new Halloween Whopper burger is absolutely inspired by the buzzworthy Kuro Burger it launched in Japan, cultural localization is certainly at work here—in a press release announcing this latest launch, Burger King asserted that while its new burger is “curious to the eye,” its flavor is “familiar and savory to the palate.”

What is the flavor behind the Americanized version of the black-bunned burger? None other than A1 steak sauce—stylized in ads as the HA1loween Whopper, the burger will feature A1’s smoky flavor baked directly into the bun, as well as a layer of A1 Thick and Hearty Sauce added to the more classic Whopper toppings like lettuce, tomatoes, pickles and mayonnaise:

“Our U.S. guests have been extremely curious about the bun flavors they’ve seen introduced in Japan and other countries, so we saw the opportunity to bring them an equally unique experience,” said Eric Hirschhorn, Chief Marketing Officer, for the BURGER KING® Brand North America. “We tailored the flavor of the black bun to the American palate with A.1. sauce, a flavor this country loves, and we’re delivering it in a way that’s never been done before by baking it into the bun. It may look Japanese but it tastes like America.”

This is perfectly in line with Burger King’s current strategy. Burger King is all about the partnerships lately, and while they don’t always come together the way that the royal Miami-based burger chain might like, they often tend to equate to some great publicity. A partnership between Burger King and A1’s maker Kraft Heinz Company is nothing groundbreaking—Berkshire Hathaway and 3G Capital share equity and interest in both, making this pairing a logical choice. What’s more, it appeals to American tastes while maintaining some of the unusual intrigue that makes novelty LTOs that much more fun.