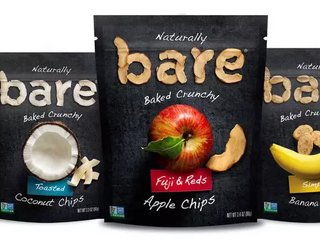 Food and beverage giant PepsiCo has announced that it is going buy baked fruit and vegetable snack maker Bare Foods. The dealis the latest effort by th...

Food and beverage giant PepsiCo has announced that it is going buy baked fruit and vegetable snack maker Bare Foods.

The deal is the latest effort by the firm to diversify its food and beverage portfolio and move towards more natural and less-processed foods.

Bare Foods was founded in 2001 by a farming family in Washington and today the firm makes products like salt-and-vinegar beet chips and Granny Smith apple chips.

Working from its headquarters in San Francisco, Bare Foods will continue to operate independently from PepsiCo but its leadership will report into the company’s Frito-Lay North America unit.

The financial details of the acquisition were not disclosed.

“We have been on a journey of broadening the snack portfolio for many years now,” said Vivek Sankaran, president and chief operating officer for PepsiCo’s Frito-Lay North America unit.

In recent years, PepsiCo has rolled out a new vegetable snack brand called Off The Eaten Path and has also launched organic Doritos, for instance.

In its 2017 annual report, PepsiCo noted that its Better for You and Good for You products make up an increasing percentage of its total portfolio, growing from around 38% in 2006 to around 50% in 2017.

The latest acquisition of the healthy snack food company is just one in a string of purchases by major food and beverage conglomerates.

In March, Campbell Soup company announced that it had completed a $6.1bn acquisition of Snyder’s-Lance Inc.

Meanwhile, Kellogg Company said that it was going to buy the owner of RXBAR protein bars in a $600mn deal.