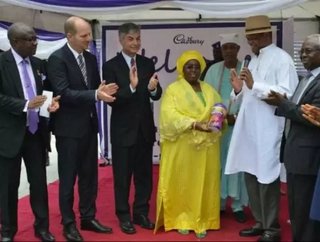 Mondelez International is not just growing its business in the United States&mdash;the snack company is growing worldwide, and that requires investments...

Mondelez International is not just growing its business in the United States—the snack company is growing worldwide, and that requires investments wherever the potential for further growth arises. This month Mondelez announced that it is pursuing strategic growth in its Africa market, investing $50 million into a new state-of-the-art production facility in Nigeria.

RELATED CONTENT: What Mondelez CEO Irene Rosenfeld can teach us about employee transparency

This investment is predicated on the popularity of Cadbury Bournvita, a cocoa beverage manufactured by Mondelez subsidiary Cadbury. While Bournvita is no longer produced in Cadbury’s native UK, it has gained substantial popularity around the world, particularly in Nigeria where Mondelez has identified it as a leading regional Power Brand. By enhancing its production power in Nigeria, Mondelez will be able to improve supply chain efficiency and deliver a better and more reliable product to its consumer base.

The new plant is located in Lagos, and replaces a previous plant with all-new technology. According to a statement from Mondelez, the new plant is fully automated and will have a much higher capacity for expansion, allowing the company to respond to further growth opportunities in the region.

"Our new Lagos plant is the latest example of our global effort to build a world-class supply chain," said Daniel Myers, Mondelez International's Executive Vice President of Integrated Supply Chain, in the company’s press release. "This investment in Nigeria boosts our production capacity for Cadbury Bournvita by more than 30 percent for 180 million Nigerian consumers. It also complements our recent investments in Egypt and South Africa where we've increased chocolate production capacity and created one of our region's biggest supply hubs for gum, moving our chocolate and gum power brands to advantaged assets."