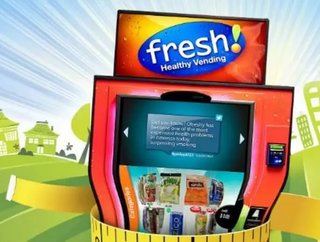 Where most vending machines offer up a display side showing off its wares just out of reach behind a pane of glass, this one appears to offer nothing bu...

Where most vending machines offer up a display side showing off its wares just out of reach behind a pane of glass, this one appears to offer nothing but flat matte black. But once it’s plugged in and the display screen leaps to life, everything changes. Detailed images of kettle chips and iced teas on a grid dance before us, jumping forward and performing three-dimensional pirouettes with the swipe of a finger to reveal the nutrition facts on their backs.

This is not the ordinary vending machine we’ve come to expect in every hallway and lobby. It’s the Fresh Healthy Touch, the new recently launched model from Fresh Healthy Vending (OTC Stock Ticker: VEND). In mid-October its first touch screen model touched down at the Bellus Academy in National City, taking its first steps toward what the brand hopes will be a revolution in the vending industry.

Power to the Users

According to Alex Kennedy, CEO at Fresh Healthy Vending, much of the power behind the new Fresh Healthy Touch machine is not in its flashy graphics – it’s in the customizable menu that allow users to whittle down their options to feature only those that are gluten-free, nut-free, vegan and more to each operator’s specifications.

“When I got into this industry seven years ago there were about 57 products that we had access to that were healthy natural products that could be vended physically from a machine. Now there are over six thousand,” says Kennedy. “People were knowledgeable about what they put in their bodies, but not to this extent – now you see those products as an answer to what the demand is. Having a machine like this allows people with specific dietary needs to take care of themselves. If they want to whittle that machine down and say ‘what’s Kosher for me? What is gluten free? What is peanut free?’ they have the ability to do that without having to come to that machine with all the product knowledge. It also gives people more exposure to products that they maybe weren’t even aware was vegan or kosher or gluten-free, and it allows us to test-market different products and get their feedback.”

It’s a feature that provides users with unprecedented agency – and that, she notes, translates to increased sales for the business and its franchisees. “So it allows the consumer a benefit, and it also allows us a benefit.”

Every brand in the world is attempting to connect with consumers through social media, and Fresh Healthy Vending is no different. With the Fresh Healthy Touch, it’s bringing social media to the street with a Twitter feed-ready display screen. But as Kennedy explains, the goal isn’t focusing on aggressive sales techniques – there’s something bigger at stake.

“It’s more about forwarding the movement of who we are, why we do what we do, and getting people to embrace the cause – because the more that we align ourselves with people who are likeminded, the more we grow,” says Kennedy. “So, say we had this machine at Horton plaza and we wanted to tell customers about a sale that’s going on at Nordstrom – somebody might be on a Twitter feed that sees that on our machine, and it really just allows us to integrate all of those people toward us.”

In the long run, that integration could pay off in much larger ways than one or two sales in the moment. “It might get us a location!” says Kennedy. “You might be a mother who sends her daughter to a private school and sees our Twitter feed at the mall, and now wants to figure out how to get that machine in her private school. You could be a wife who brings it home to her husband and says, “Honey, I think this is a great side business for us.” So it allows us to have those multiple streams of connections with people.”

Building the Brand Through Common Goals

That kind of organic interest is exactly what Fresh Healthy Vending aims for when seeking out franchisees. “We’re very lucky because the type of franchise partner we attract is who we are,” says Kennedy. “We exist because we want to make sure communities live healthier and have healthier choices – we don’t want them to be restricted to Cheetos, Fritos, and Doritos because that’s what they’re used to seeing in a vending machine. We want to have partners who already live that lifestyle, where vending is almost a secondary thought to them. The first thought is: I want my kids to eat healthier, I want their friends to eat healthier, I want to have better choices everywhere I go – why is it not that way? They see the need first, they feel that they are aligned with our concept, and then vending is secondary.”

As the company has just launched international franchising operations, this kind of outreach is sure to become key.

Fresh Healthy Touch is not the first vending machine to use touch screen technology. “We went to an international franchise conference in Dubai and everything you see is touch screen, every person we’ve talked to in Saudi Arabia and Dubai want all touch screens,” says Kennedy. “In the United States, people still like the tried-and-true combination machine.”

But times are changing and Fresh Healthy Vending is hoping to lead the way, starting with placing more options at locations where potential consumers will be open to what Fresh is selling. “The locations that we go into are primarily fitness related – schools, hospitals, dance, cheer, gymnastics, lots of YMCAs and community centers – because this is a community effort to get our communities healthier. The touch really is the next vehicle to be able to do that, to give people more education and allow them the ability to make informed choices, and we want to make sure we’re at the forefront of that.”

But will that community be drawn to this new technology? “I think for the consumer it’s going to be an easy choice – it’s bright and colorful and amazing, and even if you don’t have a particular dietary restriction, you want to know what you’re putting into your body and this allows you to do that,” says Kennedy. “Being able to see an ingredient list – not just nutritional content, but being able to really understand where these products come from and that somebody scrubbed that list to your particular needs – is an amazing opportunity.”

“I think the owners of those machines see the excitement in it, but no one ever wants to be first,” she notes. “That’s why we’re first. We’ll go out there and prove this, and then our franchisees can follow suit.”