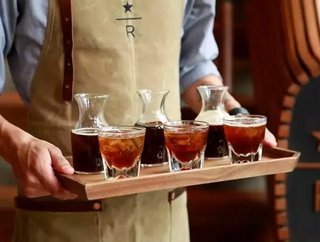 Cold brew coffee is one of the fastest growing products on Starbucks’ menu, the coffee giant said in its fourth-quarter conference. Therefore, the Se...

Cold brew coffee is one of the fastest growing products on Starbucks’ menu, the coffee giant said in its fourth-quarter conference.

Founded in 2011 by brothers David, Noah and Adam Belanich, Joyride Coffee Distributors deliver non-alcoholic beverages to commercial locations in the US including New York, San Francisco, Los Angeles, and Boston.

By making the cold brew using Starbucks’ beans and distributing it in ready-to-serve kegs, the company ensures the quality and freshness of the coffee whilst delivering it to the company’s foodservice accounts.

"Cold brew coffee is not a fad," said CEO David Belanich. "And Starbucks is actually forward-looking enough to see that and seize on it in a big way without compromising their quality and standards."

The coffee chain sells two types of cold brews at its sites, regular and nitro, with nitro being cold brew coffee that has been infused with nitrogen to give it a velvety texture.

Since adding nitro to its menu three years ago, sales in the sites that offered it jumped 25%, according to Forbes.

Therefore, the company said last year that it expects cold coffee beverages to grow to nearly half of its beverage revenue in the next five years.

The financial details of the deal were not disclosed.