KFC has launched an online merchandise shop, with $20,000 Zinger-carved meteorite for sale 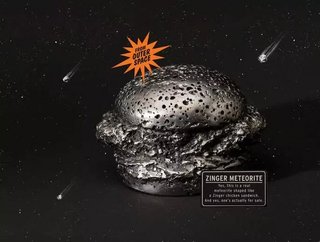 Colonel Sanders has taken a sideways step from fried chicken to front up KFC’s new range of apparel and merchandise, now available to buy online. Wit...

Colonel Sanders has taken a sideways step from fried chicken to front up KFC’s new range of apparel and merchandise, now available to buy online.

Collection items are produced in limited-edition quantities, so when they sell out, they're gone, with KFC adding that “the fried chicken faithful are encouraged to act fast and then keep an eye out for the next collection to be released”.

The most notable souvenir comes in the form of a Zinger-carved meteorite, made from 400-year-old space rock and selling for a cool $20,000.

Other items for sale include fried chicken drumstick socks, Colonel Sanders string bow ties, gold-plated necklaces and various sweatshirts. Colonel Sanders pillowcases have also been produced, while the company has also launched a limited range of smartphones made by Huawei.

Steve Kelly, KFC U.S. director of media and digital, commented: “KFC and Colonel Sanders have been American pop culture icons for more than 70 years. Our fans were craving a way to embrace the fried chicken lifestyle, and KFC Ltd. gives them the opportunity to let their colonel flag fly.”

KFC plans to partner with other notable apparel and lifestyle brands to create one-of-a-kind collaborations available only from KFC in the future. The first collection of chicken goods from KFC can be seen at www.kfclimited.com.