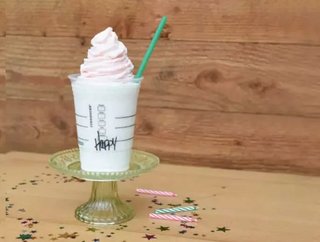 For many years, Starbucks traded solely in the production and sale of piping hot coffee and espresso drinks. But in the summer of 1993, Starbucks employ...

For many years, Starbucks traded solely in the production and sale of piping hot coffee and espresso drinks. But in the summer of 1993, Starbucks employees in Southern California made a case for the introduction of icy cold blended coffee drinks like they’d seen popping up in independent coffee shops throughout the region. After initial tests in Santa Monica and the San Fernando Valley proved successful, Starbucks took the idea back to corporate HQ for some serious R&D.

In 1995, the first two flavors of Starbucks Frappuccino were launched throughout the United States and Canada—and it caught on like wildfire.

“The first week of launch we were tracking sales, and it was something like 200,000 drinks the first week – when we were hoping for 100,000,” Dan Moore, a former California store manager who was instrumental in the idea’s implementation, related in a retrospective of the Frappuccino’s impact. “The next week it was 400,000 and the next it was 800,000. We had figured it would do well in Southern California – but it sold just as well in Chicago, Vancouver B.C. and Boston. It was huge.”

The Frappuccino was a game changer for Starbucks, transforming it from a morning-centric cold weather coffee chain into a chain with something for any customer anywhere in any weather at any time of day. “When you think about it, 20 years ago, the business, Starbucks hadn’t launched into a whole host of warm weather markets. We were reliant on the holiday season,” said Dina Campion, a longtime Starbucks employee who was one of the original district managers lobbying for a blended drink. “With Frappuccino, we were able to level out the dips in store traffic in the summer.”

A beverage that creates that kind of pivotal moment for your business deserves a celebration. So for the 20th anniversary of its nationwide launch, Starbucks is offering—what else?—a limited edition Birthday Cake Frappuccino at all locations.

The Birthday Cake Frappuccino, available March 26 through March 30, is a blend of vanilla bean and hazelnut topped with raspberry-flavored whipped cream. It tastes like a cake and like a fluffy whipped cloud, and it’s a perfect way to celebrate the occasion. It also reminds us an awful lot of the classic Chocolate Cake shot, which combines sugar-laced vodka and hazelnut liqueur Frangelico—which means we can’t wait to see how Starbucks celebrates next year for the Frappuccino’s 21st birthday.