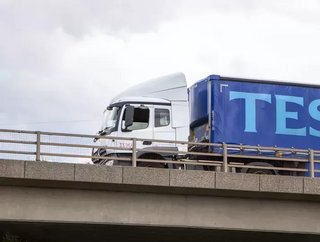 Halsary Windfarm in Caithness was built in partnership with ScottishPower Renewables to provide Tesco with energy security in its push to net zero in the UK, by 2035.

The amount of clean energy created could power up to 20,000 homes in the UK, for a year.

Tesco’s use of renewable energy

In 2019, Tesco announced a major project to source green electricity directly from five windfarms. These are part of the largest unsubsidised renewable PPA in the UK covering five windfarms and four solar farms, which when completed will provide nearly 600GWh every year. This is equivalent to powering nearly 80,000 homes and will create more than 560 additional jobs. When these are all operational it will supply Tesco with over 20% of its electricity needs direct from renewable energy.

In partnership with ScottishPower, the 30MW 15-turbine Halsary wind farm in Caithness, Scotland, represents a major step towards powering Tesco stores directly from renewable sources and becoming a net zero business by 2035. In addition, this will make renewable energy cheaper and more accessible for the rest of the UK.

Scottish businesses set the example for decarbonisation and renewable energy

“This is a critical year for climate action”, said Jason Tarry, Tesco UK and ROI CEO. “These partnerships will also help create more affordable access to renewable energy and support the UK in realising its climate change targets. Real change requires that businesses now start moving from making commitments to driving transformative action. Now is the time to accelerate our efforts to tackle the biggest challenge of our lifetime.”

Halsary is the first ScottishPower windfarm to be developed without a government support scheme.

“We’re very proud its completion will bring more clean energy on to the grid and support Tesco’s net zero ambitions”, said Lindsay McQuade, CEO ScottishPower Renewables. “With just a few months until the COP26 UN climate change summit in Glasgow, milestones like this really matter and show we can all do our bit for a cleaner and greener future. There’s a growing market across the UK for partnerships like this, which deliver new green assets and bring clean energy to the market, and these will be crucial in delivering the changes needed at the necessary pace and scale to tackle the climate emergency and reach net zero.”

The decarbonisation of the electricity sector has been a major success of Scotland’s energy policy over the past decade. Ivan McKee, Minister for Business, Trade and Enterprise in Scotland, is pleased to see the partnership between Tesco and Scottish Power going live.

“We all need to play our part in ending Scotland’s contribution to climate change, and the private sector has a key role in this journey”, said Ivan Mckee. “Scotland can show the rest of the world how it’s done – and ensure our people, businesses and communities are at the forefront of a greener, more sustainable economy. Our just transition to net zero presents many economic opportunities for our business community to embrace green innovation and investment, supporting our climate goals and benefitting our economy, environment and society.”