Coca-Cola Launches a New Aesthetic in the UK 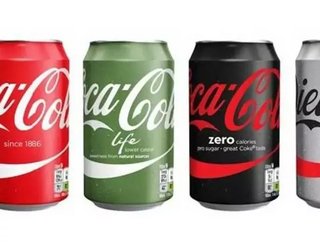 The Coca-Cola bottle is officially 100 years old this year, and its celebrating the ever evolving history of its branded packaging to commemorate this a...

The Coca-Cola bottle is officially 100 years old this year, and it’s celebrating the ever evolving history of its branded packaging to commemorate this anniversary. What better time could there be to introduce a new change in its packaging portfolio? It’s a strong change as well: in the UK, Coca-Cola is unifying its portfolio of Diet Coke, Classic Coke, Coke Zero and Coca-Cola Life under a single brand with uniform packaging across the board to bring its products closer together and make them more identifiable as that single brand.

According to an announcement, advertisements will be supporting the new packaging, which is now utilizing the same branding style across all four Coca-Cola variants. With similar font and design styling, color coding will now be the key identifier to distinguish between Coke variants—red and white for Classic, silver for Diet, black for Zero, and green for Life, colors that have long been established. As Coca-Cola executives state, this new change will help consumers associate all Coca-Cola products as part of the same line, which could encourage Classic Coke fans to try healthier options and expand their purchasing choices:

Jon Woods, general manager of Coca-Cola Great Britain and Ireland, said: “Coca‑Cola is one of the best-loved and most iconic brands in the world. With our new ‘one brand’ approach, we are uniting four distinct brands under the umbrella of Coca‑Cola. We believe our no and lower sugar variants will benefit from this closer association with Coca‑Cola and that featuring all variants in our advertising will make clear to more consumers the full choice we offer them. By focusing on building one brand and extending the appeal of the original Coca‑Cola across our lower and no sugar variants we believe we can drive sustainable growth for our business in Great Britain in the years ahead”.

The new packaging is expected to roll out throughout the UK by May 2015. There’s no word yet as to whether the packaging will make its way to other regions as well.