KFC enters the fast food market in Inner Mongolia, in a yurt 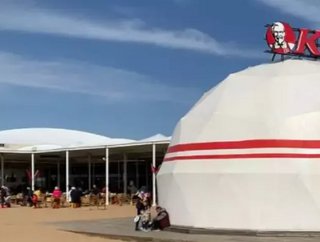 KFC is the most popular fast food in China. The franchise has a new restaurant, inside a traditional yurt, to appeal to the locals of rural Inner Mongolia

KFC has come a long way in from a gas station kitchen in the 1930s, to one of the most popular fast food chains in the world. Colonel Sanders’ welcoming grin is recognised by more than 12 million customers daily.

It might look like something at a modern music festival, but a yurt (also known as a ‘ger’) is a circular, moveable tent covered in animal skins, used by the nomadic people of Inner Mongolia.

By adapting to the local architecture, KFC can stand out as well as fit in.

KFC first opened in Beijing in 1987 and now has a revenue of $23bn, after becoming a popular treat for middle-class families. The franchise adapted to China’s taste buds by providing familiar options, such as Chinese egg tarts and rice pudding.

On Weibo, China’s censored version of Facebook, Chinese tourists were impressed with KFC’s yurt topped with the iconic logo, stressing that the respect for local customs had made a positive impact.

But the Mongolian desert is far from KFC’s greatest venture.

In 2017, a KFC spacecraft took a Kentucky Fried Chicken Zinger sandwich into space aboard a high-altitude balloon, where it stayed for four days before returning to Earth.