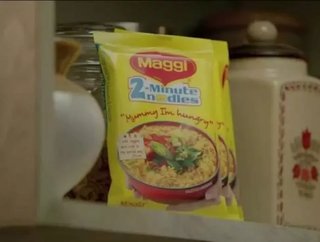 Maggi two-minute noodles are recognized as a massively popular convenience food in India, but right now the relationship between the country and one of...

Maggi two-minute noodles are recognized as a massively popular convenience food in India, but right now the relationship between the country and one of Nestlé’s flagship brands is strained at best right. Late last week, six states in total throughout India—including the capital state of Delhi—enacted a ban on the sale of Maggi noodles. The ban comes in response to concerns over food safety, after lab samples indicated that the noodles contained dangerously high amounts of lead and MSG.

This is bad news for Nestlé India, as reports of the popularity of Maggi two-minute noodles among consumers within the industry have not been exaggerated. As The Guardian reports, Maggi captures a staggering 80 percent of India’s instant noodle market; the Hindustan Times further reports that Maggi two-minute noodles account more over a quarter of revenue for Nestlé India. If this situation is not rectified soon, Nestlé is going to need to come up with sales strategy for an alternate brand or its position in India is going to be in serious jeopardy.

Nonetheless, while the company is fighting the Maggi ban, it has also been proactive in voluntarily recalling the noodles from all India store shelves nationwide. This week Nestlé discussed with the media the financial toll that the ban is taking on the business: even for a global empire as large as Nestlé, destroying what amounts to £32 million ($50 million USD) worth of product is not easy. Furthermore, Nestlé added that the issue will become even more costly when the ban is worked out and Nestlé is able to ship new product out to retailers to restock. Still, in a press release, the company noted that it is not exactly “a conducive environment to have the product in the market” right now, and a recall is the right move.

“The trust of our consumers and the safety and quality of our products is our foremost priority everywhere in the world. Unfortunately, recent developments and growing concerns about the product have led to confusion for the consumer to such an extent that we have decided to take the product temporarily off the shelves, in spite the product being safe,” Nestlé Global Chief Executive Paul Bulcke told the media in a press release from Nestlé India.

“With the consumer in mind, we will do everything it takes, and are fully engaged with the authorities, to clarify the situation to have MAGGI Noodles back on the shelves at the earliest.”