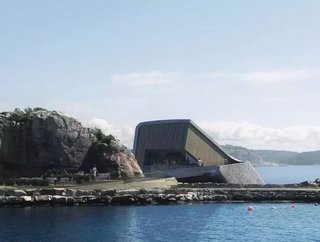 Florida, The Maldives, Dubai – and now Norway. Underwater restaurants are usually confined to exotic, luxury destinations but a small village Is now s...

Florida, The Maldives, Dubai – and now Norway. Underwater restaurants are usually confined to exotic, luxury destinations but a small village Is now set to join the ranks.

Oslo- and New York-based architecture firm Snøhetta is giving tourists another reason to book a getaway to Scandinavia: an underwater restaurant in Norway on the country’s Southern coast.

Dubbed “Europe’s very first underwater restaurant”, the aptly named ‘Under’ will be some 16 feet under the sea and will boast a large observation window offering panoramic views of the North Atlantic sea.

The restaurant has space for up to 100 guests and it is thought that the menu will focus on local cuisine.

It is also predicted that a sustainable, sea-food heavy menu is likely.

Whilst the building’s primary purpose is as restaurant, Under will also serve as a marine research centre.

The researchers will help create optimal conditions on the seabed so that fish and shellfish can thrive in proximity to the restaurant.

As well as this, the streamlined form of the building has a coarse surface which invites mussels to cling on.

Over time, the reef's inhabitants will clean the seawater around the restaurant, which will help diners see the sea life more clearly and attract more marine life to the purified waters.

“Like a sunken periscope, the restaurant’s massive acrylic windows offer a view of the seabed as it changes throughout the seasons and varying weather conditions,” reads a release on Snøhetta’s site.

"Through its architecture, menu and mission of informing the public about the biodiversity of the sea, Under will provide an under-water experience inspiring a sense of awe and delight, activating all the senses – both physical and intellectual,” the team said of its creation.

Guests will descend three levels through a submerged wardrobe area, a champagne bar and finally the restaurant itself.

The company is also applying a colour palette “inspired by the coastal zone, with its subdued colours evoking the sediment of shells, rocks and sand."

The name of the restaurant, Under, is a play on words - in Norwegian, "under" can also mean “wonder”.

The team hopes to begin construction next year, with the aim of opening in 2019.