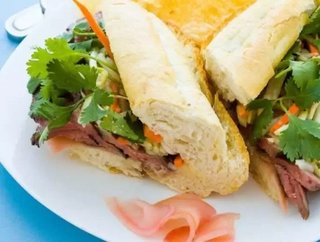 Yum Brands has gone a long way on the pure strength of its three core fast food franchise brands KFC, Pizza Hut, and Taco Bell. But no one can deny the...

Yum Brands has gone a long way on the pure strength of its three core fast food franchise brands KFC, Pizza Hut, and Taco Bell. But no one can deny the consumer attraction power that more high-concept QSR chains are enjoying right now. To that end Yum is testing new waters with the launch of Banh Shop, a new concept specializing in a particular Vietnamese sandwich known as the banh mi.

Not too much is known yet about the new concept, as it’s still a developing story and its doors have not yet opened, but the hyper focus on one type of food certainly hearkens back to the Chipotle model and its focus on ingredient quality over menu item quantity. That’s what’s in right now for many consumers, and Yum Brands is smart to explore this idea – they’re even smarter for exploring the idea through an entirely new concept instead of radically changing one of its core franchises, a move that often risks resulting in consumer backlash. This method helps Yum observe consumer reactions while keeping its new endeavors totally separate and keeping its fans loyal to their brands.

Banh Shop makes the third high-concept QSR that Yum Brands has unveiled within a very short period of time – in April Yum also announced the incoming launch of upscale taco joint U.S. Taco Co. and Taproom to open in Huntington Beach, and the soft opening of soon to be Chick-Fil-A competitor Super Chix in Arlington, TX.

Adding this new banh mi restaurant means that Texas has become a hot spot for testing new concepts – which makes sense, considering that the state is a Yum Brands hot spot. After all, while the official Yum Brands and KFC headquarters are in Louisville, KY, with Taco Bell residing in Irvine (close to U.S. Taco Co., natch), Pizza Hut is based in Plano, TX while Yum’s new concept development team in Dallas.

What is Yum’s plan with these new concepts? Clearly they are testing the waters on which concepts will sink and which will float, but are there plans to grow all three into franchises, or will this trial by fire find only one or two moving forward to the chain growth round? We don’t know yet, but we’re eager to watch and find out.