[VIDEO] Pranksters Trick Foodies Into Singing the Praises of McDonalds 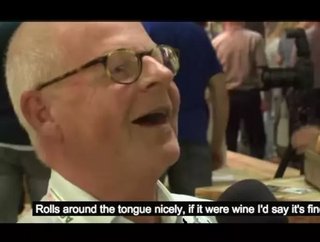 Happy Friday! How about some interesting psychology to take you into the weekend? How much of the food we enjoy as consumers is based on taste, and how...

Happy Friday! How about some interesting psychology to take you into the weekend?

How much of the food we enjoy as consumers is based on taste, and how much of it is based on perception and what’s in fashion – what we’re “supposed to” like, versus what’s out of style or a guilty pleasure? Two Dutch pranksters went on a mission to find out, and the results might be a better commercial for the wholesome and tasty merits of McDonald’s than its own mythbusting “Our Food, Your Questions” campaign:

(Don't forget to click on closed-captioning button for subtitles!)

The video brings Sacha and Cedrique, part of viral content creation team Lifehunters.TV, to a fine food expo in Houten, The Netherlands. The pair comes armed with bags full of burgers and breakfast items and Chicken McNuggets, all artfully doctored and displayed to appear more high-end and touted as “a new, organic alternative to fast food.”

“The taste is very rich,” says one of several industry professionals and spectators who drift by the pair’s expo booth. “Delicious,” says another, while still another enthuses that she would recommend the new delicacies.

Emboldened, the pair asks those trying the products – if they had to compare this to McDonald’s fare, what would they say is the biggest difference? The answers all seem to be tied to a perception of freshness and purity. “It definitely tastes a lot better, and the fact that it’s organic is definitely a good thing,” says one, while someone else claims that “you can just tell this is a lot more pure.” Another woman insists that these samples have “a lot more taste to it than McDonald’s,” while a man states, “it’s just a pure, organic product and that makes it very tasty.”

Is it organic? Of course not – it’s McDonald’s. Its purity, whatever that actually means as anything beyond a buzzword, is up for debate – after all, Grant Imahara’s inside-the-patty-plant video did assert that McDonald’s burgers are made with 100 percent pure ground beef. In that regard these experts are right on the mark, but we doubt that’s what they had in mind with their statements.

It all says some interesting things about consumers and the power of suggestion. Sacha asks Cedrique what we learned today, to which he replies: “That if you tell people that something is organic, they’ll automatically believe it’s organic!”

It’s also curious that, in spite of such positive reviews, McDonald’s profits are still in trouble. So what’s the deal? Are consumers not allowing themselves to enjoy McDonald’s knowingly because it’s out of fashion compared to more en vogue QSR concepts? Or are consumers easily swayed to prefer foods that they perceive to be of higher quality, even if they would never claim the same otherwise?

In one study, researchers gave subjects wine to sample and scanned their brains using an fMRI scanner. The subjects all drank the same wine twice. But on one occasion, they were told it was a $90 bottle, while another time they thought it was a $10 bottle. Not only did these subjects report that the wine tasted better when it was presented as a much pricier vintage, but their brains reacted differently, too. Scans showed increased oxygen and blood flow to the medial orbitofrontal cortex, a part of the brain believed to play a role in how we experience pleasure in food and other types of rewards.

It’s a curious phenomenon, and some food for thought this weekend as you consider not just what you like, but why.