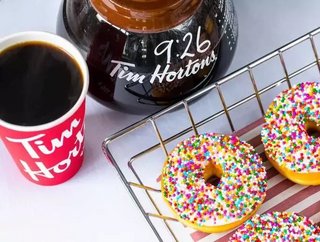 Tim Hortons, Canada’s famous coffee chain, has revealed the appointment of Kevin Hydes as its new Chief Finance & Commercial Officer. Hydes, who joined at the start of July, will oversee business strategy, brand execution and development in the UK market.

Tim Hortons opened its first British and European restaurant on Argyle Street in Glasgow, at the start of June, and Hydes is charged with delivering a concept that takes off among a congested market in Britain.

He said: “It’s not often you get the chance to help bring an international brand as exciting as Tim Hortons to the UK. The opportunity to lead and grow the business in a competitive market like Great Britain was too good to miss.”

Hydes previously spent 11 years at Costa Coffee, overseeing the marketing function in the UK during a significant period of growth, winning Brand of the year in 2011 and becoming market leader in 2012.

More recently in the role of International & Brand Development Director he was responsible for managing and developing brand execution across both equity international markets in Poland, Singapore and France and for franchise operations across 26 markets in Europe, the Middle East and South-East Asia.

Gopi Dhaliwal, COO of Tim Hortons UK and Ireland, added: “We’re delighted to have attracted someone of Kevin’s calibre to Tim Hortons. Kevin brings an enormous wealth of experience from his time at Costa Coffee, and his expertise of quickly scaling food and drink retail brands will be vital to our long-term ambitions in Great Britain.”

As of September 30, 2015, the company had more than 4,700 system-wide restaurants located in Canada, the United States and the GCC.