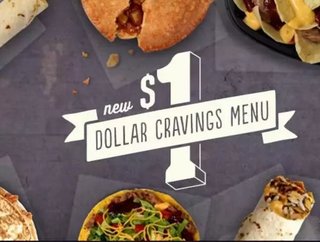 Taco Bell has been on a roll with new menu updates and upscale expansion projects, and this week it is rolling out yet another phase to its plan. On Mon...

Taco Bell has been on a roll with new menu updates and upscale expansion projects, and this week it is rolling out yet another phase to its plan. On Monday, Taco Bell launched its new Dollar Cravings dollar menu.

The new dollar menu comes hot on the heels of the Cantina Power menu, launched in mid-July, and satisfies a few convergent purposes. First and most importantly, it appeals to a whole new demographic compared to its new Cantina Power menu. While the Cantina Power items are health conscious yet on the pricier side, the Dollar Cravings menu is as cheap as it gets and pure comfort food indulgence smothered in cheese and creamy chipotle sauce, separated by flavors like “spicy” and “cheesy” with items like mini quesadillas and the Beefy Fritos® Burrito (a ringer for the brand’s old Beefy Crunch Burrito LTO).

Furthermore, on the surface this new dollar menu also positions the brand once again squarely against its biggest North American rival McDonald’s, especially since McDonald’s has had to concede many of its former low prices by giving up its Dollar Menu in favor of its revamped “Dollar Menu and More” menu where very few items are actually a dollar.

But most of all, just below the surface it’s a savvy win for the Yum Brands subsidiary’s bottom line. Despite the fact that every Dollar Cravings menu is a dollar, triggering feeling of savings for consumers, the new menu actually represents a slight bump in price compared to the franchise’s former “Why Pay More?” value menu. This preceding menu offered items like the cheesy roll-up and cinnamon twists that used to sell for less than 99¢. But by putting them within a context of a flat price and a menu that consumers automatically associate with savings, even with the small price hike these items could still manage to invoke feelings of a bargain.

Taco Bell has been on a hot streak since the launch of its breakfast menu. It doesn’t look like this newest launch will change that streak – rather, it’s likely to continue building consumer good will and propelling the brand forward.