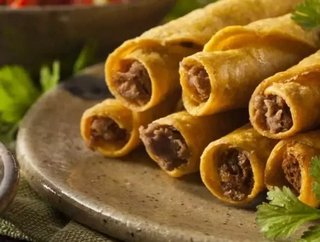 The new menu item train does not stop at Taco Bell, and the newest addition to the roster is admittedly pretty exciting. At long last, rolled tacos are...

The new menu item train does not stop at Taco Bell, and the newest addition to the roster is admittedly pretty exciting. At long last, rolled tacos are coming to Taco Bell.

According to reports, Taco Bell is launching two types of rolled tacos: a chicken rolled taco and a crispier “crunchy taco.” Instead of coming topped with shredded lettuce and cheese and sour cream like a traditional taco shop plate of taquitos, these rolled tacos are being marketed as an item for dipping. For these dipping purposes, consumers will be able to choose from five different dipping sauces: spicy ranch, guacamole, salsa, nacho cheese, and reduced fat sour cream. Consumers will be able to pick up a 2-pack of rolled tacos for $1.99, a 4-pack for $3.99, or a Taco Duo 12-pack (with three sauces!) for the bargain of $10.99.

In what smacks of trying to disguise a taquito as something other than what it is, which is a taquito, Taco Bell has unveiled its newest bid for your gustatory attention: Rolled tacos, with dipping sauces. You know, like taquitos.

This must be a soda vs. pop type debate, because your humble editor grew up saying “taquitos,” only to be met with confusion from peers who grew up saying “rolled tacos.” But there are worse things than arguments over semantics—we could have grown up unaware of the existence of taquitos/rolled tacos altogether, as USA Today’s coverage suggests from its description of the new Taco Bell menu item as “wacky” and the result of “younger consumers…demanding unlikely new products with more flavor and unconventional ingredients” as opposed to a staple item that was long overdue for the taco-based franchise.

But even in those dire straits, it will all be okay. Those who have not known the glory of rolled tacos (taquitos) will know soon enough—because starting Thursday, they’ll be available at Taco Bell.