Panera Bread pledges to strike 150 artificial ingredients from its menu 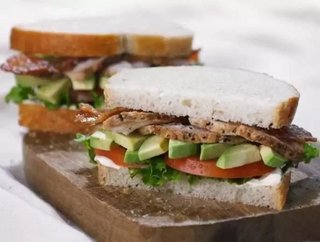 Last week Chipotle announced that it has banned GMOs from its ingredients list (more or less, with still more work to further along the supply chain). B...

Last week Chipotle announced that it has banned GMOs from its ingredients list (more or less, with still more work to further along the supply chain). But Chipotle isn’t the only QSR chain on the block with a dramatic menu revamping plan. Today sandwich and pastry chain Panera Bread announced plans to remove a grand total of 150 preservatives, sweeteners, and other artificial ingredients from its products at all Panera Bread and St. Louis Bread Co. locations by the end of 2016.

According to reports, Panera worked with the Environmental Working Group (EWG), an advocacy and research group, to develop its No No List of now off-the-table ingredients including high fructose corn syrup, propylene glycol, FD&C colors, azodicarbonamide (that infamous “yoga mat” additive), added nitrates and nitrites, artificial smoke flavor, and many more.

“Last year we unveiled our Food Policy to hold ourselves accountable to long held values and set the future vision for our menu. The No No List is the latest step on our journey to clean food and a transparent menu,” said Panera Bread founder and CEO Ron Shaich in a press release from the chain, adding that this is the first step in a long journey that aims to position Panera Bread as a partner alongside consumers making healthful choices. “Simplifying our pantry is essential to our vision, but it is not an end point. We want to be an ally for wellness for the millions of guests we serve each week.”

There’s no doubt that this kind of declaration is quickly becoming a trend among certain segments of the QSR market. But is it genuine? Chipotle’s non-GMO pledge has already drawn some criticism from skeptics questioning Chipotle’s motives as based less on science and more on savvy marketing gimmicks. But Schaich has come out ahead of this line of questioning by acknowledging forthright that Panera’s decision isn’t about hard science; it’s about keeping its food simple, and it’s about supporting its core consumer base in their desires and concerns:

“We are not scientists. We are people who know and love food, and who believe that the journey to better food starts with simpler ingredients,” said Schaich in the press release. To the New York Times, Schaich discussed the chain’s consumer-driven stance on the issue further:

“I’m not a scientist and I’m not wading into the debate over whether any of these things cause cancer or are otherwise bad for you,” he said. “I just think this is where the consumer’s head is right now.”

No matter what the catalyst was for this change, the result is a fully redesigned menu with new takes on the brand’s classics that keep the classic flavors while eschewing unnecessary chemicals—and that’s a move that has won the approval of many organizations and advocacy groups. “We applaud Panera for its pledge to eliminate a wide array of chemical additives from its foods,” said Erik D. Olson, Director of the Health Program for the Natural Resources Defense Council. “This is part of the company’s quest to address consumer demands and potential health concerns. The company’s previous commitment to sell meat and poultry raised without antibiotics helped establish it as an industry leader, and we look forward to working with them to carry out their additives policy.”

Panera Bread and Chipotle may be among the first to make this change—but they certainly won’t be the last.