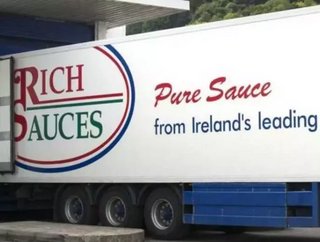 The story of Rich Sauces has a very Irish flavour to it, mixed with a dash of Northern Irish engineering and a never say die attitude. When Trevor Kells...

The story of Rich Sauces has a very Irish flavour to it, mixed with a dash of Northern Irish engineering and a never say die attitude. When Trevor Kells’ fish processing business collapsed in 1985, he went to work in his parents’ fish and chips shop in Belfast. It was his only option, says the man who describes himself as ‘unemployable and unbiddable’!

He wasn’t working there for long, however, before he realised the opportunity right under his nose. He and his mother Maud Kells had been working tirelessly to finalise the best recipe for their chip shop mayonnaise. Once completed, Trevor decided to apply his engineering skills to build a specialised machine in order to produce commercial volumes of their product. His unique selling point in those early days was the ability to provide mayonnaise in industrial volumes that was consistently superior to what his customers could produce in their own kitchens. It would save them time and money and improve the quality of their product offerings, something that remains the core principal of the business to this day. This focus on his customers as well as a never say die attitude has led to Trevor assuming a position of chairman, mentor and serial innovator in a close knit family business, that today employs more than 60 people at its factory in Newtownards.

Rich Sauces has upward of 60 catering food suppliers throughout the UK and Ireland, and customers in the USA, the Middle East and continental Europe, with its products being sold exclusively to food manufacturers and processors. Mayonnaise and its variants are still a stable of the range, which now extends to ketchups, uncooked highly flavoured sauces (another of the company’s proprietary technologies), bouillons and many more dressings and wholesale sauces, sold under the Rich Sauces brand or in the newer Alfees range. Click here to continue reading this article in the December 2015 issue of Food Drink and Franchise!