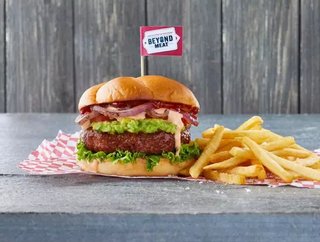 Plant-based protein producer Beyond Meat has said that its global expansion is imminent, as it aims to enter 50 new markets across the world this summer...

Plant-based protein producer Beyond Meat has said that its global expansion is imminent, as it aims to enter 50 new markets across the world this summer.

The Los-Angeles company says it has partnered with select distributors to help it enter the market in over 50 countries including Germany, Canada, Australia, Mexico, Chile, Israel, UAE, Korea, Taiwan and South Africa.

Since the firm launched the Beyond Burger in 2016, it has sold over 13 million of its “bleeding” Beyond burgers.

Its products, including the Beyond Burger, are made entirely of plants and claim to have more protein than a beef burger.

Beyond Meat has grown rapidly in the US market, doubling its sales in 2017. The firm’s burgers are now  It has also increased the distribution of its portfolio, expanding its footprint across 27,000 grocery stores and restaurants.

“These additions make it possible for us to support international launches, building upon the successful 2017 introduction of the Beyond Burger in Hong Kong.”

In December, Beyond Meat raised $55mn in a funding round to triple its production capacity, with backers including former CEO of McDonald’s, Don Thompson, and Tyson Foods, the largest American-owned processor and marketer of chicken, beef and pork.