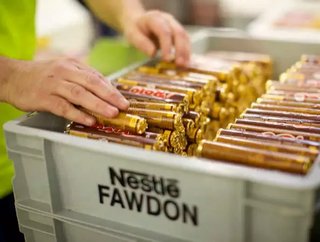 Nestlé said that its total sales rose 2.3% to CHF43.9bn ($44.07bn) in the first half of the year, supported by “increased momentum” in the United States and China.

The world’s largest food and beverage company said that it was on track to meet its full-year guidance, noting that its net profit also rose by 19% to CHF5.8bn ($5.5bn).

Nestlé's largest division, the Americas, saw a 3.4% drop in sales, which it said was due to the divestment of its US confectionery unit, which it sold to Ferrero for $2.8bn in January.

Meanwhile, the company’s sales in Asia, Oceania, and sub-Saharan Africa rose 2.95 with accelerated growth in China, particularly in coffee.

The firm’s coffee and nutrition divisions helped to drive growth in Europe, Middle East and North Africa also, with total net sales up 6.9%.

During the first half of the year, Nestlé said it has actively tried to shift its portfolio towards high-growth, high-margin categories and brands.

For instance, the company announced a global coffee partnership with Starbucks and invested in n brands such as Freshly, Sweet Earth, Blue Bottle Coffee, Chameleon Cold-Brew and Terrafertil.

"Our first half results confirmed that our strategic initiatives and rigorous execution are clearly paying off,” said Mark Schneider, Nestlé CEO.

“Nestlé has maintained the encouraging organic revenue growth momentum we saw at the beginning of the year. In particular, the United States and China markets showed a meaningful improvement. We were also pleased by the enhanced organic growth in our core infant nutrition category.”

“Our margin development is fully consistent with our 2020 target. We are creating value by pursuing growth and profitability in a balanced manner. In line with this approach, we have accelerated our product innovation efforts to drive future growth and initiated significant cost reduction efforts, in particular in Zone EMENA and at our Corporate Center.”