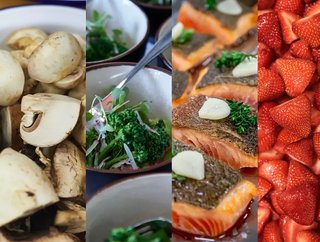 The industry-first decision, which has been developed and deployed throughout 2021, forms part of the ongoing evolution of Levy’s wider food strategy in the new year and beyond, representing a significant step towards the company’s carbon-neutral ambitions.

The move will see an even greater emphasis placed on British seasonality by the Levy procurement team and executive chefs when designing menus across venues including Tottenham Hotspur Stadium, The O2 arena and the All England Lawn Tennis Club at Wimbledon. Under the new approach, dishes prepared by Levy chefs will increasingly reflect seasonality both in terms of composition and taste, utilising in-season ingredients when they are at their peak. This sharpened focus on seasonality will see Levy chefs using runner beans, asparagus and seasonal berries instead of imported items such as fine beans, South American asparagus and air freighted berries from over the world.

Levy has worked closely with Foodbuy, the procurement arm of Compass Group UK and Ireland, to analyse the journey of all food produce supplying Levy UK venues, ensuring that point-of-origin is specified and clearly labelled on the fruit and vegetables used by company chefs.

Freight transport collectively accounts for more than 7% of all global emissions, according to the International Transport Forum. Air freight is thought to be the most carbon-intensive method of transporting fresh produce. The decision to ban air freight aligns with Levy’s broader food philosophy and the commitments outlined in the Levy Cares Charter, launched back in 2018, which details the company’s approach towards designing menus that are beneficial to people and the planet. As well as championing British seasonal produce, Levy remains committed to reducing food waste, limiting reliance on animal protein across its menus and promoting a greater proportion of plant-forward options across all its venues and hospitality tiers.

Levy’s ambition is to one day be in a position to deliver carbon neutral menus in as many of its venues as possible.

Jon Davies, Managing Director of Levy UK, said: “It has long been our ambition as a company to divest from the use of air freight in our procurement and supply chains. As the market leader in sports and leisure catering, we believe it is our duty to continue leveraging the power of our supply chain to drive better environmental, safety and welfare standards right across our sector. We are constantly building, shaping and refining our regional, national and international supply networks to ensure that Levy remains an agent of change at the forefront of the food industry.

“On the procurement side, it’s about finding alternatives to air freight that are less harmful to the environment. Lots of green vegetables which can be grown right here in the UK are unnecessarily imported from abroad via this method, which carries a huge cost to the health of our planet. We will still supply produce such as tropical fruits and avocados where there is demand, but it’s about finding producers closer to home – continental Europe, for example – or less harmful methods of transportation that reduce our carbon impact on the planet, such as boat, road or rail.”