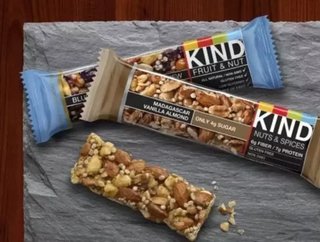 What makes a food &ldquo;healthy&rdquo;&mdash;is it in a rigid adherence to standards for every individual statistic on the label, or does it lie in the...

What makes a food “healthy”—is it in a rigid adherence to standards for every individual statistic on the label, or does it lie in the overall benefits of the food as a whole? No matter what your definition of healthy is, the FDA is sure that the popular Kind bars are not it.

This week the FDA issued a warning level to Kind, LLC finding several of its products “in violation of section 403 of the Federal Food, Drug, and Cosmetic Act (the Act) [21 U.S.C. § 343].” The agency examined several types of Kind bars, from Fruit & Nut Almond & Apricot to Peanut Butter Dark Chocolate + Protein. According to William A. Correll, Jr, Director at the FDA’s Center for Food Safety and Applied Nutrition, “none of [Kind LLC’s] products listed above meet the requirements for use of the nutrient content claim ‘healthy’ that are set forth in 21 CFR 101.65(d)(2).”

Clearly, that’s a big issue for a brand that stakes its identity on being a healthier snack alternative. So what’s the big issue?

One of the biggest issues is saturated fat. According to the FDA, a food product claiming to be healthy must have a saturated fat content of 1 g or less. Yet several Kind bars exceed that standard: with several bar types containing between 2 and 3.5 g of saturated fat per 40 g of the food, and the Almond & Coconut version containing an especially impressive 5 g of saturated fat, the FDA has declared any “healthy” claims misbranding and a Section 403 violation.

But can health really be gauged by saturated fat content? Saturated fat is quite controversial right now—while the fat was previously demonized, new studies are showing that fat is not the problem it was once made out to be, and that some types of fats (even saturated fats) are desirable and healthy. In particular, saturated fat-laden coconut oil has been found to present several benefits to health.

This controversy over the role of healthy fats hasn’t escaped Kind LLC. In response to the FDA’s warning letter, the company responded with an open letter of its own claiming that, while it is working to comply with the FDA’s standards, the issue of fat in its snack bars is more complicated than it seems:

Nuts, key ingredients in many of our snacks and one of the things that make fans love our bars, contain nutritious fats that exceed the amount allowed under the FDA’s standard. This is similar to other foods that do not meet the standard for use of the term healthy, but are generally considered to be good for you like avocados, salmon and eggs.

Nevertheless, saturated fat is not the only issue that the FDA found with Kind’s health claims. Other issues include misuse of terms like “antioxidant-rich” and “good source of fiber.” The FDA states that Kind LLC has 15 business days to respond with a plan for corrective action.