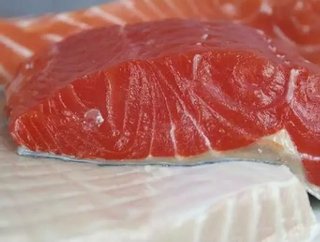 After years of debate and evaluation, the U.S. Food and Drug Administration is taking a definitive stand on genetic engineering in food: today the agenc...

After years of debate and evaluation, the U.S. Food and Drug Administration is taking a definitive stand on genetic engineering in food: today the agency made its first ever approval of “a genetically engineered animal intended for food,” the controversial AquAdvantage Salmon created by AquaBounty Technologies.

AquaBounty’s genetically engineered salmon is essentially an Atlantic salmon, imbued with genetic code from Pacific-Chinook salmon and ocean pout to help it grow to market size in half the time compared to non-GE Atlantic salmon. The FDA determined that the salmon is safe for consumption and bears no “biologically relevant” differences in nutritional profile compared to the average non-GE farm raised salmon.

“The FDA has thoroughly analyzed and evaluated the data and information submitted by AquaBounty Technologies regarding AquAdvantage Salmon and determined that they have met the regulatory requirements for approval, including that food from the fish is safe to eat,” said Bernadette Dunham, D.V.M., Ph.D., director of the FDA’s Center for Veterinary Medicine, in an official statement from the FDA.

The approval does come with some restrictions: the AquAdvantage salmon must only be farmed and raised in “land-based, contained hatchery tanks” to avoid any possibility of cross-contamination with natural salmon populations. To date, only two facilities—one in Canada and one in Panama—have met the FDA’s standards for breeding and raising these GE salmon. This means that, for the time being, AquAdvantage salmon is not allowed to be bred or raised in the United States—or anywhere else outside of those two aforementioned facilities in Canada and Panama, for that matter.

Despite the precautions, this approval still courts controversy. The FDA drafted guidelines for voluntary labeling of the salmon as a GMO in tandem with this approval, rather than the mandatory labeling that some opponents of genetic engineering would have preferred. According to the FDA, it comes down to simple science.

“Under the Federal Food, Drug, and Cosmetic Act, the FDA can only require additional labeling of foods derived from GE sources if there is a material difference—such as a different nutritional profile—between the GE product and its non-GE counterpart,” reads the statement. “In the case of the AquAdvantage Salmon, the FDA did not find any such differences.”

While the decision may not make every consumer happy, the FDA has spoken. With this step, the FDA has made a definitive move to pave the way for further bioengineering in the future.