Doritos Roulette is finally coming to the US 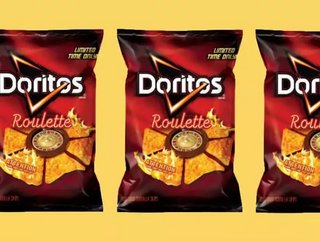 Last year PepsiCo subsidiary Frito-Lay launched a limited edition Doritos flavor in Canada with an extra-interesting twist: Doritos Roulette, a sort of party game of chance in which a few super spicy chips are mixed into a bag of otherwise mild Nacho Cheese Doritos. Whose taste buds will survive another day, and who will happen upon a fiery chip? It’s anybody’s guess. First launched in Mexico, then in Canada and several other markets around the world, our one hope last summer was that the LTO would soon make its debut in the United States as well.

Now our hopes have been answered. Today Frito-Lay announced that Doritos Roulette will be launched in the US this week. It’s an LTO that is undeniably social in nature—after all, who plays roulette by themselves? Whether it’s Doritos or a plate of buffalo wings hiding one atomic ghost pepper hot wing, food roulette games are all about watching your friends for hilarious reactions when the rogue hot snacks are found. So to get Doritos fans hyped up about the launch of Doritos Roulette, the brand is co-launching the chips alongside a social media campaign that similarly encourages interaction.

“To celebrate the product’s arrival stateside, the Doritos brand is bringing the spirit of Doritos Roulette chips to life via online games of chance on Twitter,” stated a press release from Doritos announcing the chip launch. “Using #DoritosRoulette, fans can play for the opportunity to win various prizes ranging from wireless speakers to gaming consoles. Fans also can tune in for a live game show-type giveaway with even bigger prizes streamed on Twitter’s new Periscope platform. The Roulette-style twist? Three out of every four participants will earn a truly awesome prize, while one in four will walk away with a dud.”

Doritos Roulette will be hitting shelves this week, available for just a limited time. If you’re a spicy food fan like us, you’ll be a winner no matter which chip you choose.