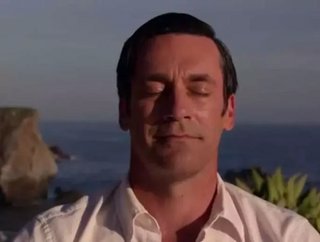 Partnerships between creative endeavors and consumer brands have been a vital part of movie and television history from the beginning. The best product...

Partnerships between creative endeavors and consumer brands have been a vital part of movie and television history from the beginning. The best product placement is the kind that isn't shoehorned in—it's relevant and makes sense within the context of the scene. It looks like Coca-Cola scored some quality product placement points with the role that it played in last night’s finale of the iconic series Mad Men.

Spoiler alert: the final episode of Mad Men culminated with a scene of Don Draper meditating at a retreat in Big Sur (likely the famed Esalen Institute), part of a group meditation class perched on grassy cliffs overlooking the ocean. In between soothing chimes, the meditation instructor advises on all that a new day can bring with it—a new day, new ideas, a new you. What does the new day awaken and inspire in Draper? It inspires the idea for a new ad campaign, of course. As he closes his eyes and chants with the meditation class, he smiles—and as the first words of an instantly recognizable song appear, Mad Men ties Don Draper to Coca-Cola history by suggesting that he was the ad man behind one of the brand’s most iconic jingles.

Coca-Cola is on everyone’s minds the morning after, and the brand itself is certainly aware of it. Today the Coca-Cola Company released a statement noting Mad Men’s salute to its “Hilltop” ad. Coca-Cola also used that attention to direct consumers to learn more about the making of the ad, taking care to note that it was actually dreamed up by real life McCann Erickson ad man Bill Backer. (It’s no coincidence then that McCann Erickson acquires Sterling Cooper & Partners in the show’s last season.)

Will the Mad Men finale directly translate to a sales increase for Coca-Cola? Did it make millions of viewers thirsty for Coke? That much is difficult to quantify, at least right now. But where it does succeed as product placement of sorts for Coca-Cola is in reminding consumers of its power and reach as a brand. There’s a reason why it was written into that spot: it’s a beverage icon, still the top carbonated soft drink brand with nearly half of the U.S. market share. When we think of the ultimate in inspired branding, the perfect capstone to end a seven-season character study of the advertising industry, we think of Coke.

It’s not exactly traditional product placement, the simple appearance of a product in the background in exchange for funding or other synergies. It’s also not really about the product at all, so much as a very specific ad campaign. But in context it makes perfect sense—and any way you slice it, it’s an awfully desirable spot for any brand to be in.